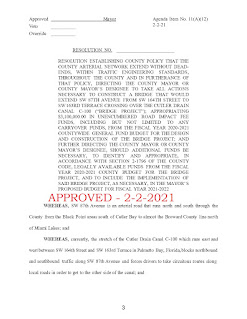 Cutler Bay's Mayor Tim Merbott appeared before the Board of County Commissioners and plead his case for building the bridge.

There was no appearance, no speakers, from the Palmetto Bay Mayor or Village Council.

Those present on the County Commission joined in a unanimous vote to approve the resolution. agenda item 11(A)(12). The item moves forward.

Sad, but I predicted this back on December 15, 2021, when I asked the questions, raised the issues, and asked a fair question in the Tuesday, December 15, 2020, post “2021's first test - the bridge is back. Will it unite or divide Palmetto Bay? Will it happen without input from Palmetto Bay's so-called leaders?”
The other shoe has now dropped. And Palmetto Bay officials dropped the ball. We all saw on February 2, we saw that there is no plan of the Mayor and Palmetto Bay Council, but to blame the County Commission and to deflect responsibility from where it lies – squarely on the current Palmetto Bay Mayor and Council

Let's be clear, my opinions in that post concern much more than to bridge or not to bridge. It is about issue straddling and pandering misstatements passed along in Palmetto Bay,  much of the time done through proxy. The conflicting promises made, talking points specially developed for whomever the candidates are speaking, the underground attacks and rumor mongering (and preventing debates where the truth would be aired).

Distractions, misdirection. A local government of bread and circuses.

Questions from concerned residents: "Will Palmetto Bay leaders support or oppose the bridge?"

(Non) Response from elected officials: "Look! Over there! Palmetto Bay is holding birthday drive bys, would you like one? Don't miss out"

What is the plan? I heard the rumors made in the door to door personal campaigning - to vote against Silva and David Singer as they were “pro-bridge”. So now we have a District Commissioner who is on board with the bridge. So again, I ask, What is the plan from Palmetto Bay leadership?

Sad. No leadership. React rather than advocate. Allow things to happen and then blame those who are successful at pushing forward their competing agenda.

Posted by EugeneFlinn at 3:00 PM