More on the failure to attend the very important County Commission meeting. It cost Palmetto Bay dearly. How it should have been prevented. Read the Village Charter.

I am not buying the “had to work argument” (and we know she was somewhere else at or about 9:00 am on that date). The Village Charter has provisions written into it designed to prevent such issues. The question is whether any of the current members of the village council read the Village Charter, and if so, do they understand how it provides for a process to ensure that important events are not missed such as appearing before the County Commission on Tuesday, February 2, 2021? There is no denying that the Council knew this important matter was coming before the Board of County Commissioners the following day. They discussed it in public the night before. They know their schedules. They know the importance of this issue to all involved. All five should have planned to, no, not planned to, they all should have actually attended the next morning – it was that important.

Again, the fair question: what “scheduling conflict” did each of them have that prevented them from attending the Board of County Commission meeting the following morning? It strikes me similar to the famous Bill Murray (playing John Winger) quote in the movie Stripes, when his character objects to the drill sergeant waking them up early for a morning run:

Sergeant Hulka: We got a full day ahead of us. We're gonna start out with a five-mile run.

John Winger: I know that I'm speaking for the entire platoon when I say this run should be postponed until this platoon is better rested.

OK, so many of you don't have the movie Stripes memorized like I do, but the dialogue quoted above does make a serious point - not everything is life is scheduled to meet with your convenience. And, if you thought the bridge issue was tough, the issue just doubled in effort by their failure to appear, the Mayor and Council have to reverse what occurred on February 2, 2021; which is going to be much, much, more difficult than a ten mile run.

Read the Charter. It provides for the ability to designate others to appear.

Here are some important provisions placed in the Palmetto Bay Village Charter:

(A) This government has been created to protect the governed, not the governing. In order to provide the public with full and accurate information, to promote efficient administration management, to make government more accountable, and to insure to all persons fair and equitable treatment, the following rights are guaranteed: 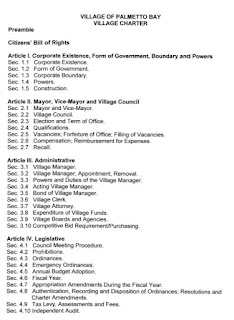 (2) Truth in Government. No municipal official or employee shall knowingly furnish false information on any public matter, nor knowingly omit significant facts when giving requested information to members of the public.

(13) Representation of Public. The Mayor shall endeavor to designate one or more individuals to represent the Village at all proceedings before County, State and Federal regulatory bodies whose actions may significantly affect the Village and its residents.

(3)The Mayor shall be recognized as head of the Village government for all ceremonial purposes, for purposes of military law, and for service of process.

(4)The Mayor shall be the official designated to represent the Village in all dealings with other governmental entities.

(B)Vice-Mayor. During the absence or incapacity of the Mayor, the Vice-Mayor shall have all the powers, authority, duties and responsibilities of the Mayor.

WHERE WAS THE VICE MAYOR? This meeting was important. At least it may have saved the folly of an “Emergency” Meeting” (It’s only an emergency because the council failed to attend the commission meeting). Note that our current Vice Mayor is an attorney and nearly all attorneys have occasionally been called to short notice or "emergency" hearings where they are expected to attend and participate. (Unless our current vice mayor has lived a truly charmed professional life where everything is scheduled with never an unexpected conflict)

Final Editor’s Note: Fairness in scheduling events to enable public participation: If the Mayor, Vice Mayor and Village Council can’t attend County Commission meetings because they ‘have to work’, then why are they scheduling Palmetto Bay sunshine meetings, visioning sessions and other sundry meetings to take place during the regular work days? It seems kinda contradictory, doesn’t it? Contradictory or hypocritical, you decide.