Posted by EugeneFlinn at 8:00 PM No comments:

Hello Boys I'm Back - Video of the day - just for fun

I am just having a little fun on this Sunday morning.  I don't know what it means.

Have a great Sunday.

Posted by EugeneFlinn at 11:00 AM No comments:

Email ThisBlogThis!Share to TwitterShare to FacebookShare to Pinterest
Labels: just for fun, Photo of the Day

Palmetto Bay’s own festive boat parade is scheduled for Saturday, December 20.  CLICK HERE to view the Facebook event page.  Once again, an annual "thank you!" to Rainer & Noel Schael, as well as all the members and participants of the Palmetto Bay Canal Association Holiday Boat Parade for organizing this event.  Spectators can enjoy the parade from Coral Reef Park, Bill Sadowski Park, or anywhere along the canal parade route. Gather your family and friends in the beautiful Palmetto Bay outdoors while celebrating the spirit of the holidays.

If you wish to enter your boat into the parade, or for additional information, please FB Message or email Rainer Schael at rainer@rs-env.com 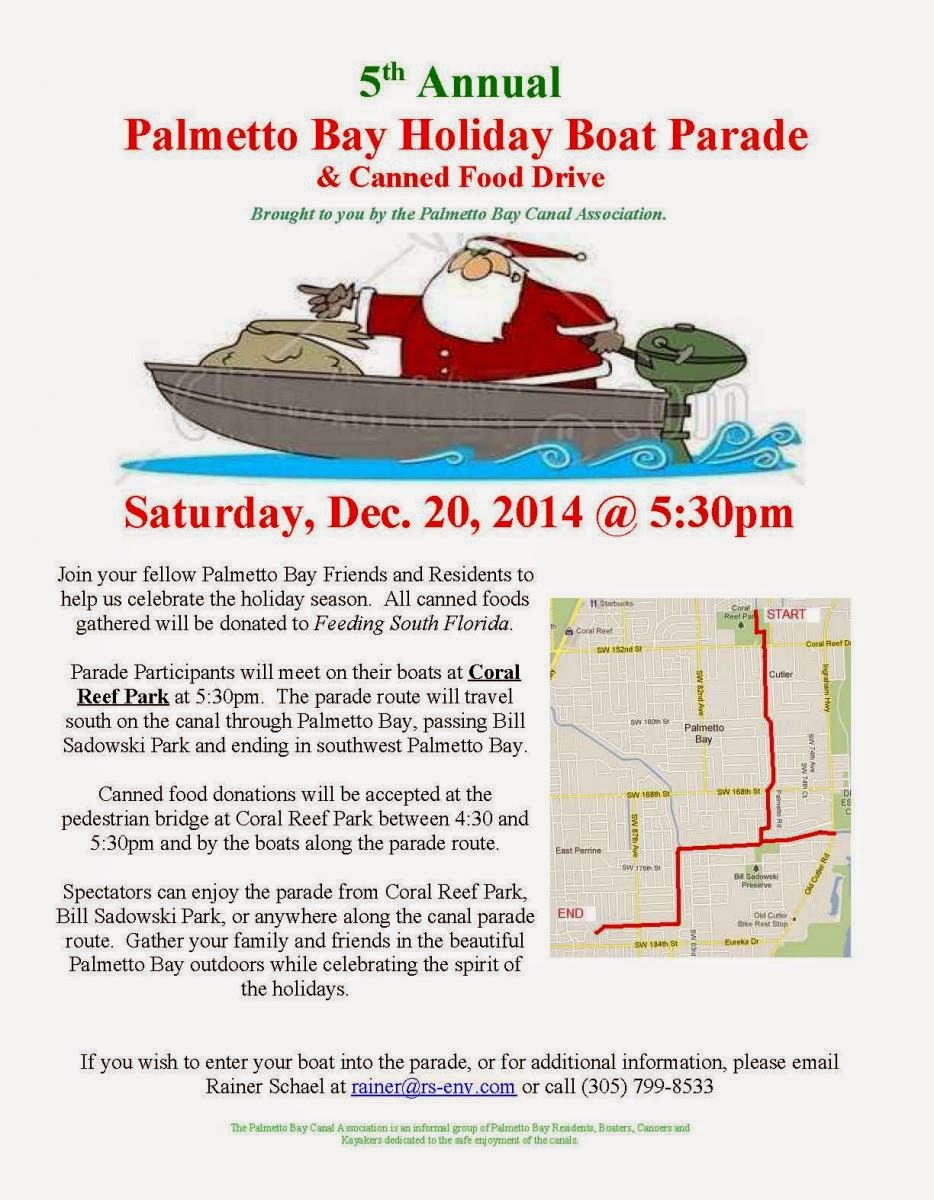 I have posted photos from the 2013 event on the South Dade Updates Blog (CLICK HERE).

This is a wonderful community event that brings participants, friends and neighbors together in the holiday spirit, collecting canned food for a good cause, and is supported both by members of the residential community as well as a local business.

The Palmetto Bay Canal Association is made up of Palmetto Bay (and Pinecrest) residents that are both users and stewards of our local canal system. The group includes pleasure boaters, fishermen, skiers, canoers and kayakers.

Click the label “Boat Parade” label on the South Dade Updates blog to view posts and photos from prior Palmetto Bay Canal Association Holiday Boat Parades.
Posted by EugeneFlinn at 8:00 AM No comments:

Please also take the time to remember and help the less fortunate.  Many families and children are doing with less, Take the time to become involved in a local charity, with time, if not a donation. There are many ongoing charities that are looking for donations and volunteers. The Palmetto Bay Canal Association will be collecting canned foods during its 5th Annual boat Parade scheduled for Saturday, December 20.
Thanksgiving is the busiest traveling season of the year.  Please be aware and be safe.
One of my personal favorite quotes about a holiday:
On Thanksgiving Day all over America, families sit down to dinner at the same moment - halftime.
– (author unknown)
Posted by EugeneFlinn at 8:00 PM No comments:

I will have more to say in the near future, but for now I simply want to express my deep and sincere appreciation to my fellow Palmetto Bay residents. 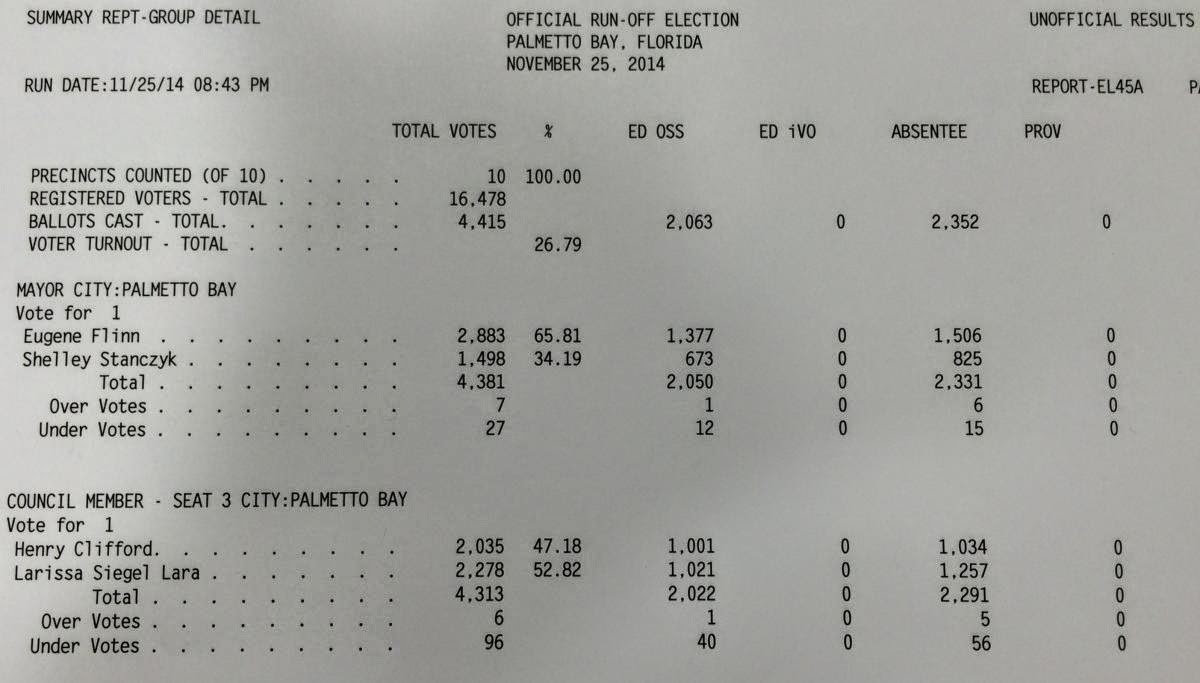 And in the race for District 3, which represents the southern part of the village, political newcomer Larissa Siegel Lara beat veteran village activist Henry Clifford by a small margin.

From the start, Stanczyk, 65, who has been on the dais since 2006 and mayor since 2010, faced a tough bid for reelection. She faced three challengers in the general election, two of whom, including Flinn, made a divided and bickering council during her tenure top campaign issues. Among the most divisive issues: the village’s protracted, expensive and unsuccessful fight against the expansion of Palmer Trinity, a private school in a residential neighborhood.

Outgoing council member Patrick Fiore and retired business executive Peter England, the other mayoral candidates, endorsed Flinn when they failed to make it to the runoff.

As is typical in runoffs, the turnout was low. Of 16,478 registered electors, only 4,415 voted. About half of the votes came in absentee.

Read more here: http://www.miamiherald.com/news/local/community/miami-dade/palmetto-bay/article4151752.html#storylink=cpy
Posted by EugeneFlinn at 7:20 AM No comments:

Vote at your assigned precinct on Tuesday, November 25.  Polls are open from 7 AM to 7 PM.

Posted by EugeneFlinn at 7:27 AM No comments:

PB Checks the record - a true comparison. I am running on my positive record, not misleading attacks.

Be careful what you print and distribute in those nasty attack ads. They may come back to bite you.  Comparing records is one thing, but distortion or falsely claiming credit is quite another.  It is fact check time courtesy of Lola Duffort of the Miami Herald:

Zoning:
Stanczyk’s mailer says it’s his 2008 decision to deny rezoning that lead to the lawsuits – but Flinn points out that she voted “no” along with him then, and continued to do so after he left.

“It’s really funny — you’d think she would be giving me credit for voting with her on that. Instead she wants to blame me, even though she voted the same way,” he said.

Finance:
The Stanczyk mailer told voters that Flinn left office without getting the village rated – that’s not true, ratings were released in his last year in office. (Emphasis added)

Read for yourself by clicking the link above (or HERE). 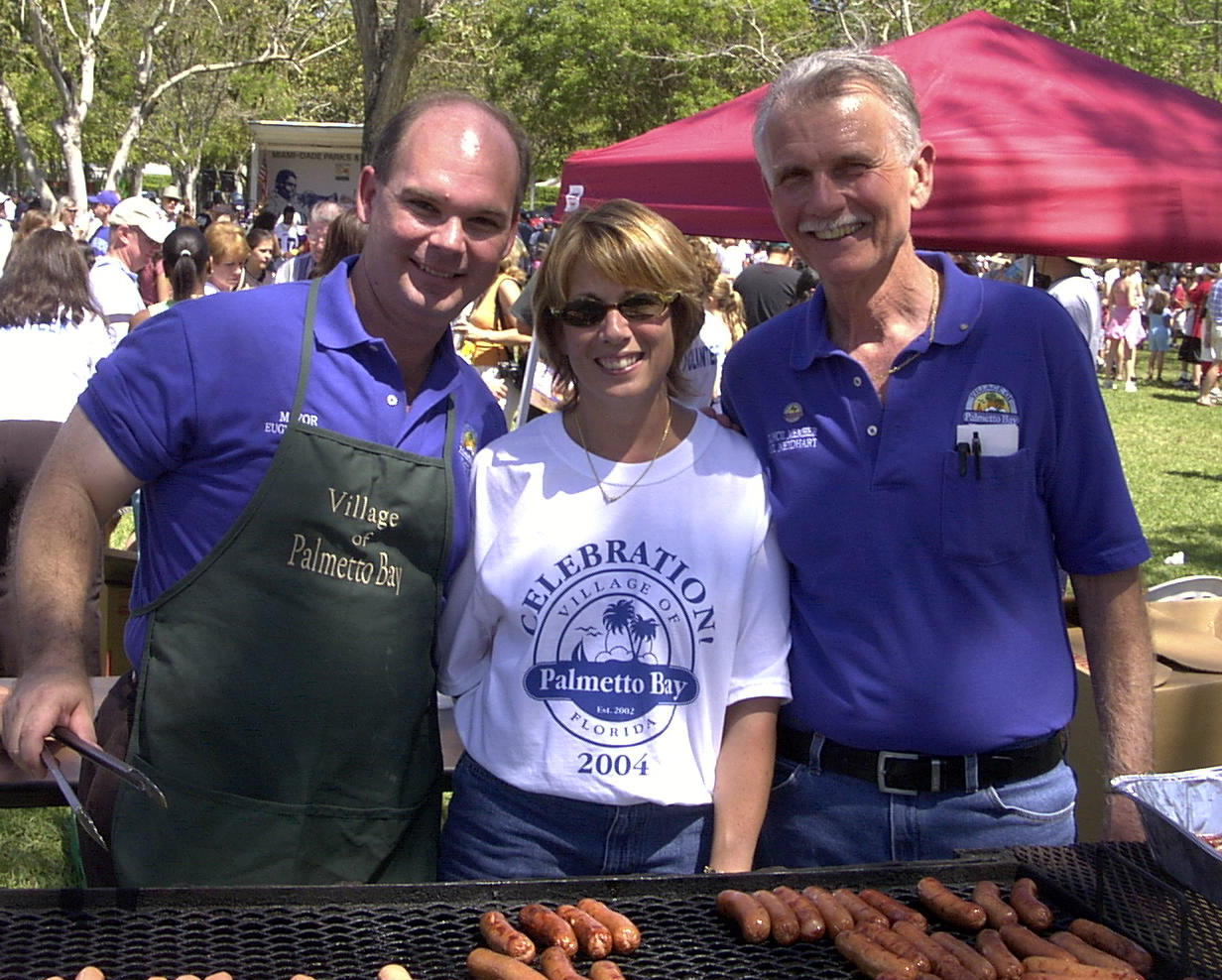 Please CLICK HERE to view my positive record for Palmetto Bay in detail.  I am proud of what we accomplished in our first eight years and there is much more we can accomplish, but we need to work together and stop the baseless attacks and name-calling.

I humbly ask for your vote to continue the positive vision of Palmetto Bay!

Posted by EugeneFlinn at 8:00 AM No comments:

The Franjo Triangle Commercial Island Charrette Report – posted online (not available on the official Palmetto Bay website) at http://pbadupws.nrc.gov/docs/ML1021/ML102110564.pdf Note that this is an 84 page document and is a slow download.  This is “A Citizens’ Vision Plan” November 2004 and was a partnership with Palmetto Bay and the Miami-Dade County Department of Planning and Zoning, Community Planning Section.

Posted by EugeneFlinn at 9:48 PM No comments:

Veterans Day - 2014 - Thank you for your service to our country

Veterans Day is a holiday honoring living military veterans. It is a Federal and State holiday observed by all 50 states.

I would like to take this opportunity to recognize and thank all US Military veterans for their service to our country.  Everyone should take a moment to honor those who have preserved our freedom and protected all of our rights, including the right to vote. 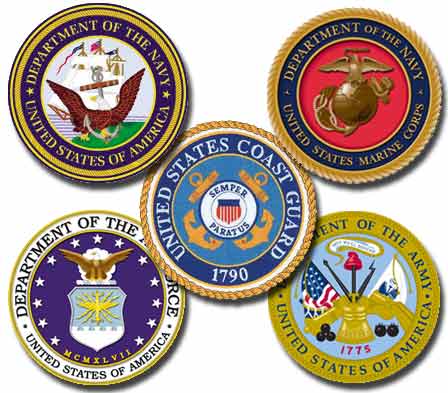 President Woodrow Wilson first proclaimed Armistice Day on November 11, 1919. Other countries today also still recognize November 11th as Armistice Day or Remembrance Day in honor of the Armistice treaty which ended WWI. The U.S Congress amended this act on November 8, 1954, making this holiday Veterans Day as we know it today.

Military dot com list ways that you can celebrate and educate your children about Veterans Day:http://www.military.com/veterans-day/celebrate-veterans-day.htm

Thank you to every man and women who has served our county as a member of our armed forces
Posted by EugeneFlinn at 2:00 PM No comments:

Please join us this Wednesday, November 12, from 6 to 8 PM at the PBVC - Palm Room

There is a run-off election on Tuesday, November 25, to decide the Mayor and Council District 3 positions.

I humbly ask for your vote.

I also invite you to join your friends and neighbors for what should be a fun event  this Wednesday, November 12, from 6 to 8 PM at the Palmetto Bay Village Center - Palm Room (3rd Floor). 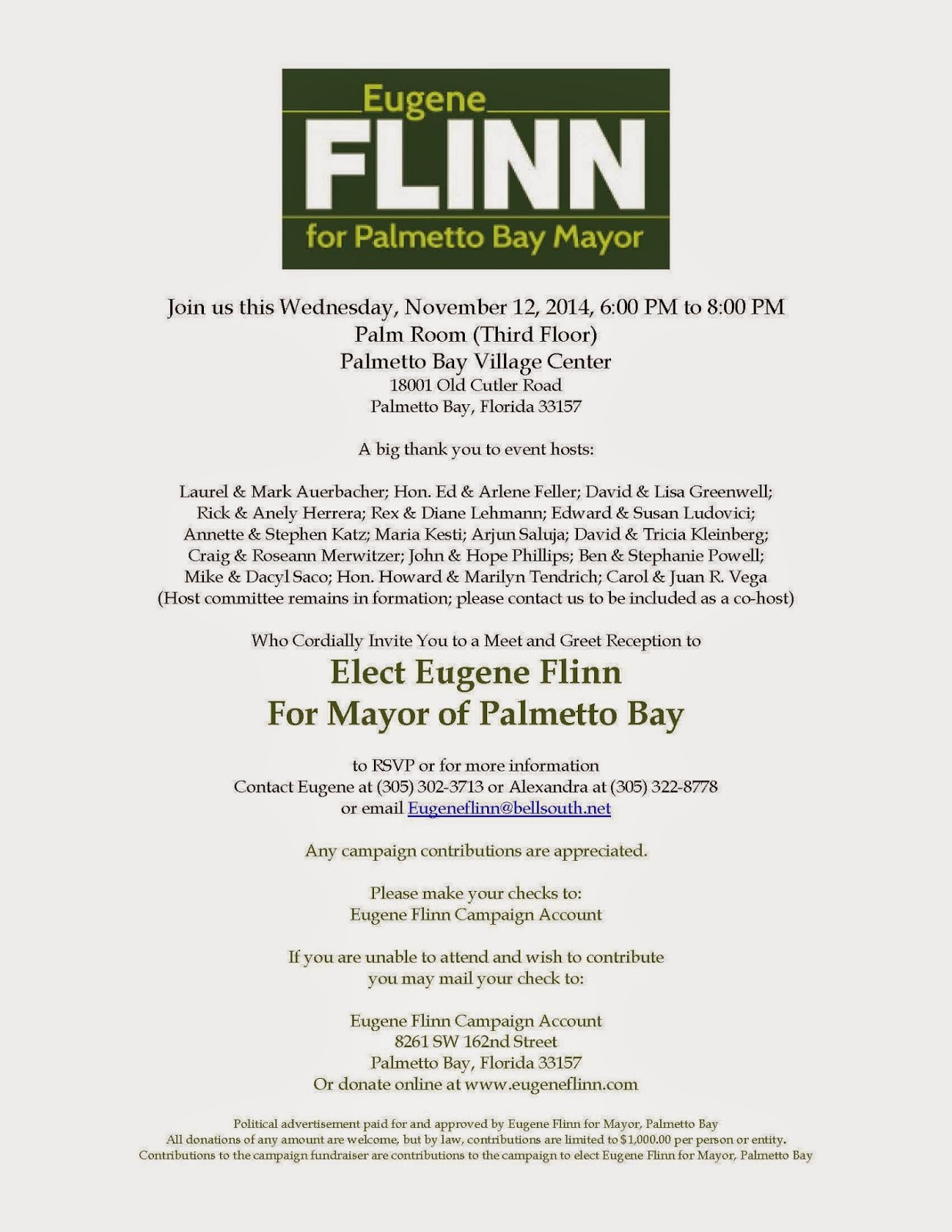 Posted by EugeneFlinn at 3:00 PM No comments:

An important read on the Miami Herald.com site:

And yes, I am focused.  I am tuning out any distractions: “I’m focused on my record, and that’s what I’m campaigning on,”

But it is more than mere promises.  We will see a return to realization of village goals, including ... more traffic calming initiatives, expanded park programming, a village personnel audit, and a clearer timeline and goals for the village’s redevelopment efforts to create a commercial district in the southern area known as the Franjo Triangle.

Posted by EugeneFlinn at 12:01 AM No comments: