Memorial Day 2017 - We remember those who made the ultimate sacrifice.

Monday, May 29, 2017 - the day we remember those who made the ultimate sacrifice to protect our freedom.

We owe our peace and democracy to them. Please observe a minute of silence at 3:00pm local time to pay tribute to Americans who've died in military service.

YOU ARE INVITED - to remember Memorial Day Monday, May 29, at the American Legion Marlin Moore Post #133, Village of Palmetto Bay.  See my 2016 post: "Memorial Day 2016: You are invited to American Legion Post 133.The remembrance poppy and the poem In Flanders Fields."

All patriotic members of our community are cordially invited to attend the Memorial Day Ceremony  honoring our departed sister and brother veterans on May 29 at Marlin Moore Post #133, 16401 SW 90th Avenue.

The Ceremony will begin at 11:00am. After the service a hamburger and hotdog  cookout for all.

Please feel free to stop by and thank a veteran.

The first Memorial Day was officially proclaimed on May 5, 1868, by General John Logan, national commander of the Grand Army of the Republic.

Memorial Day is celebrated at Arlington National Cemetery each year with a ceremony in which a small American flag is placed on each grave. Traditionally, the President or Vice President lays a wreath at the Tomb of the Unknown Soldier. The occasion is also marked in almost every State on the last Monday in May.
Congress established the National Moment of Remembrance at 3 p.m., local time, on Memorial Day, asking Americans wherever they are to pause in an act of national unity. The Moment does not replace traditional Memorial Day events; rather it is an act of national unity in which all Americans, alone or with family and friends, honor those who died for our freedom.
The flag should be flown at half staff until noon on this Memorial Day on all buildings, grounds and naval vessels throughout the United States, and in all areas under its jurisdiction and control. All people of the United States are requested to display the flag at half-staff from their homes for the customary period.
_______

What’s the Difference Between Veterans Day and Memorial Day?
Posted by EugeneFlinn at 1:00 AM No comments:

I was advised that the subject is to be charged with three felonies – three counts of leaving a scene of an accident with injuries and two misdemeanors – leaving the scene of the accident with property damage.
I want to thank our MDPD/Palmetto Bay Policing Unit for their persistence and talent so far in this case.  I particularly want to recognize MDPD/Palmetto Bay Motor Officer Mike Valdez.
This is an update – there is no judicial determination of guilt or innocence at the present time.

That is all the information that I am authorized to release at the present time.
Posted by EugeneFlinn at 4:30 PM 1 comment:

Make no mistake about it – we are at a critical point – but everyone should rest assured that Cutler Bay Mayor Peggy Bell and I share the same core values on transit.  We express it in the following joint statement prepared by Mayor Bell that we discussed in our conference held late Friday, May 12:

The Town of Cutler Bay and the Village of Palmetto Bay are dedicated to working together to find solutions to the traffic challenges our residents face daily. We are committed to obtaining Rail Mass Transit for South Dade, which is the most important way to address the explosive growth that continues to occur in South Dade. This growth is not due solely to our two municipalities. Cities south of us and unincorporated Miami Dade County residents must drive through these same streets to get to their destinations.
We understand our residential streets are becoming more congested as we await these county decisions. We are working diligently with Miami Dade Transit to expedite this much needed Mass Transit improvement.
Recently Miami Dade County staff has added the SW 87th Ave. bridge project to the Transportation Planning Organization (TPO) list of potential projects. Understandably, residents who live north of the potential bridge project are concerned about the increase in vehicular traffic. Additionally, many residents who live south of the project are hoping the County gives them this additional north- south corridor that will decrease their commute time.
This project can create tension and discord among our neighboring municipalities.


As Mayors of two prominent municipalities in the South Dade community, sister cities, we both have worked together on issues that mutually affect our residents. We are committed to continue to find solutions together, that will benefit all of our residents. We urge Miami Dade County staff to reevaluate this particular project and provide the appropriate data to substantiate this bridge connection.
Posted by EugeneFlinn at 1:00 AM No comments:

The link above will take you to the full official Palmetto Bay release of May 8, 2017: Palmetto Bay Village Council Continue to Strongly Oppose Bridging on SW 87 Avenue, Excerpt posted below.

Posted by EugeneFlinn at 2:12 PM No comments:

This is a call to action. Cutler Bay is set to discuss the bridging of 87th Ave. within Palmetto Bay

When are we going to get serious about real mass transit – funding the solutions rather than kicking the can down our residential streets and flood our neighborhoods with more cut through traffic?

I'm very disappointed to report that our sister city stated an intent to discuss the bridging of 87th Ave. at their next town Council meeting which is set for Wednesday, May 17, 2017.  This was discussed at a multi city meeting held on Friday, May 12, 2017.

I need to obtain consensus from the Council, but it is my intention to defer our Committee Of the Whole meeting for that same night, in order to allow all council members to appear before the Cutler Bay Town Council to discuss our unified position.

It is important to note that our staff has reviewed the potential impact and for comparison I offer the following possibilities: that per county numbers, 12, 500 vehicles travel 87th Ave. on a daily workday. It was estimated that 40% of these vehicles would continue to cross the bridge, if constructed, placing over 5,000 vehicles per day into a quiet neighborhood. There is no argument to the contrary that this would have a profound detrimental impact on this community. For comparison sake, our own staff has estimated that these 5,000 vehicles would have the same impact as immediately adding 3,000 occupied units within that same area.

Again, I am disappointed that a sister city may be considering to flush their traffic impact into our neighborhoods. It is my desire that they do not take any action that would force a bridge as this profoundly places at risk our South Dade municipal coalition and well as implementation of rail.

This is another band aid to avoid real solutions; to reduce the number of vehicles driving through our roads. This only encourages single car use: a failed transportation plan. This is treating a symptom, but not the root of the problem: US1, the lack of transit and the over development of South Dade.  While overall transit ridership is down over 8% in the County, the South Dade Busway (renamed as the Transit way) has actually increased by 30%.  Don’t kill the success through enabling single driver personal vehicles.

One of my major concerns is that the more we relieve traffic pressure (through temporary band aids), the less need there is for County to look at realistic and long-term traffic solutions such as light rail. This will also bring down ridership numbers; actually placing more cars on the road. My position remains consistent: that we need to get cars off the road, and not find more routes through neighborhoods to get to workplaces farther north.

I remain available to discuss this any any issue with you. Please email me at eflinn@palmettobay-fl.gov.

I respectfully request that you attend our special council meeting on Monday, May 15, where we will discuss possible changes to our schedule to accommodate us speaking before the May 17, 2017, Town of Cutler Bay meeting. I strongly urge that those who feel strongly on this issue getting engaged and actually plan on appearing and speaking at these meetings.
Posted by EugeneFlinn at 5:00 PM 1 comment:

Getting ready for the upcoming budget process. 2016 ADOPTED MILLAGE RATES


We are reaching budget time in Palmetto Bay. CLICK HERE to view the Public Meeting Schedule & Notices page where you can follow upcoming meetings.  The annual budget is a process, not a single event.  I always remain available to meet and discuss, the earlier, the better to get ready for the upcoming budget process.

Its time to start looking at the rate we pay, the services we receive and whether Palmetto Bay remains committed to “Government Lite”?


It is important to review what other areas pay, as well as the services that are provided.  I am posting below the comparable municipal tax rates; UMSA, Pinecrest, Palmetto Bay and Cutler Bay are pulled out and posted below.   Please CLICK HERE to view the full Miami-Dade County online listing.

I have excerpted out and present our neighbor municipal rates:

1.9283  Unincorporated Miami Dade County (UMSA) – Paid by residents in surrounding areas
such as the Falls, East Kendall, Goulds, The Redland, etc. (This is the rate we would be
paying had we not incorporated.
2.3000  Pinecrest
2.3292  Palmetto Bay
2.3907  Cutler Bay

Please begin your own review and contact me via e-mail at eflinn@palmettobay-fl.gov or via phone at (305) 302-3713 to discuss. 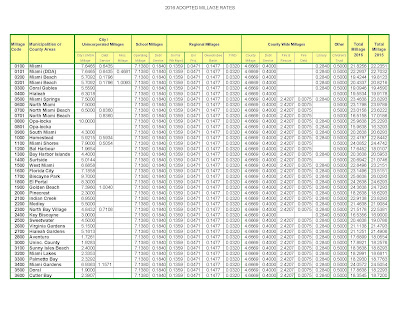 Posted by EugeneFlinn at 7:00 AM No comments:

Update on the Saturday, April 29, 2017 hit and run.  MDPD has put out a flyer providing information.  Event to be featured on WSVN Channel 7 by Rosh Lowe this evening (Tuesday, 5/2/2017 - and will be updated here when video available).  Police need your help.


On Saturday, April 29, 2017, at approximately 7:40 a.m., a black 2013 Honda Civic (similar vehicle depicted on attached flyer) is believed to have been involved in a hit & run accident involving injuries. The accident occurred at 82nd Avenue SW 161st Street, in Palmetto Bay. The vehicle is missing the driver's side-view mirror due to the accident. The driver is described as a white male with black hair in his early 20's. If anyone has any information, please contact Crime Stoppers at 305-471-TIPS (8477). You may remain anonymous. Please stay tuned for our media release. 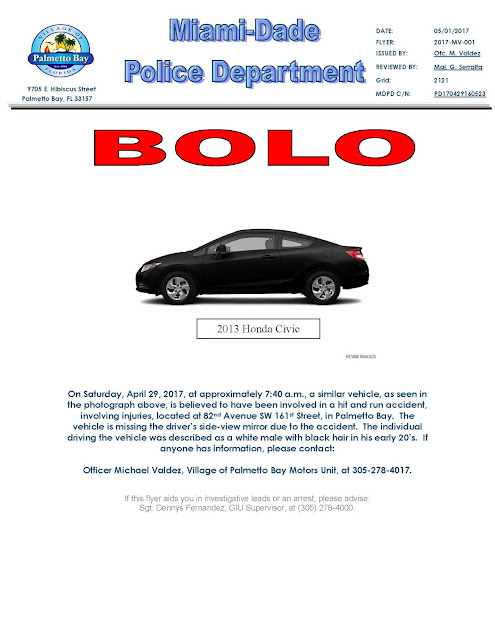 Again, this is my personal note: This is a serious matter. I am asking anyone who knows something to speak up.  Do not get involved in covering up.  The driver may be prosecuted under the Aaron Cohen Life Protection Act for leaving the scene of an accident involving injuries.


Posted by EugeneFlinn at 3:30 PM No comments: