What have you been doing over this weekend?  I have asked in prior year's posts whether you celebrate this federal holiday by reflecting upon legacies of past presidents; simply relax over a long weekend; take in one of the annual community events; take advantage of sales; or none of the above?  This year is special, COVID edition. The predominant answer appears to be "none of the above" as the annual community events are not going forward due to COVID (in responsible communities). Next year. There will be next year, assuming the vaccine actually rolls out in time to meet that sweet spot where most or all are vaccinated before the prior vaccinations wear off.

Presidents' Day is celebrated on the third Monday in February.  Sadly, by some, it is better known commercially as the Presidents' Day Sale where we celebrate and save with (alleged) great deals! Including providing for an extra 15 - 20% off plus free shipping (online)!
A short History of Presidents’ Day
Presidents’ Day was first celebrated in the 1880s, with the birthday of George Washington was first celebrated as a federal holiday.
Controversy: long weekends versus recognizing the actual date:
In 1968 Congress passed the Uniform Monday Holiday Bill in 1968. This moved federal holidays to Mondays. The intent was to provide for long weekends. There was opposition to this move, by those who believe that those holidays should be celebrated on the dates they actually commemorate. 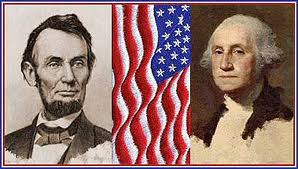 And then there was one national day for all presidents:
How many of us remember celebrating both Washington’s and Lincoln’s birthdays as separate events? Presidents' Day became the officially celebrated holiday in 1971, to honor the birthdays of both Washington (February 22) and Abraham Lincoln (February12). Note that Abraham Lincoln’s birthday was celebrated in many states, but was never an official national holiday (I wonder which states celebrated? Extra points awarded for those who can answer)
Posted by EugeneFlinn at 8:00 AM