2021's first test - the bridge is back. Will it unite or divide Palmetto Bay? Will it happen without input from Palmetto Bay's so-called leaders?

Where do the Palmetto Bay elected leaders stand on this issue?

Let's be clear, my opinions here in this post concern much more than to bridge or not to bridge. It is about issue straddling and pandering misstatements passed along in Palmetto Bay,  much of the time done through proxy. The conflicting promises made, talking points specially developed for whomever the candidates are speaking, the underground attacks and rumor mongering (and preventing debates where the truth would be aired).

Distractions, misdirection. A local government of bread and circuses.
Questions from concerned residents: "Will Palmetto Bay leaders support or oppose the bridge?"
(Non) Response from elected officials: "Look! Over there! Palmetto Bay is holding birthday drive bys, would you like one? Don't miss out"

What is the plan? I heard the rumors made in the door to door personal campaigning - to vote against Silva and David Singer as they were “pro-bridge”. So now we have a District Commissioner who is on board with the bridge. So again, I ask, What is the plan from Palmetto Bay leadership?

This should be interesting as a bridge is not an issue that can be easily straddled. This is an issue like human rights, a woman’s right to choose, balanced budgeting, and the death penalty; you are in or out.

Where do the current Palmetto Bay elected leaders stand on this issue? We know well where our District commissioner stands on this issue, as reported in the Miami Herald, A lawyer who won her first county battle in middle school, Cohen Higgins joins commission, By Douglas Hanks, Dec 14, 2020:

As a candidate, Cohen Higgins broke with Levine Cava on one top local issue: a county plan to build a bridge over a canal in Palmetto Bay and allow Southwest 87th Avenue to continue over it.

Levine Cava got heat for opposing the plan, which Palmetto Bay’s leadership didn’t want for the traffic it would bring north of the canal. Communities south of the canal backed the bridge as a way to ease cars snaking through neighborhood streets instead of taking 87th Avenue straight through. Cohen Higgins backs the bridge.

“I was very vocal and clear on that position,” she said. “I didn’t want to sit on the fence on it. I knew the politically safe thing to do would have been to give a cryptic response.”

So for those who voted for Cody and Tellam on the allegation that they will oppose the bridge (which was a position I never personally heard from either of them during their respective campaigns); I again ask: "What is the plan?" and will there be any public positions made or will it be muted responses by the current Palmetto Bay officials, be a "cryptic response" taking as it would be "...the politically safe thing to do..."? This is something Commissioner DCH has refused to do. Good for Commissioner DCH. Honesty in government. I should warn her about that.

Now in Palmetto Bay, will we see action or a shrug of the shoulders? Denial and avoidance, all calculated to absolve themselves of any responsibility to control development in Palmetto Bay under the phrase “it is a County issue”.

The kool aid handed out along 87th Avenue, north of the canal, may soon taste bitter.

BTW, I am looking forward to many good things from Commissioner DCH, I realize that I may not agree with her on everything, but she is very upfront about her plans, her vision.

We shall see, these are exciting times we live in. But there are times that exciting is not a good thing. What will change in 2021 from 1998 (yes, 1998), 2015, 2017 and 2018? Recommended reading: January 6, 2020, Palmetto Bay’s current Mayor needs to stop hiding behind proxy attacks and build coalitions, not angry mobs through misinformation. 2020’s first textbook example of poor leadership.

I leave you with this - the rendering of the new bridge planned for SW 136th Street. Note the bike lanes on both sides [where do the west bound (Pinecrest side) bicyclists go before and after the bridge? I ask this as the bike lanes were removed from the project, but apparently remain on the bridge] 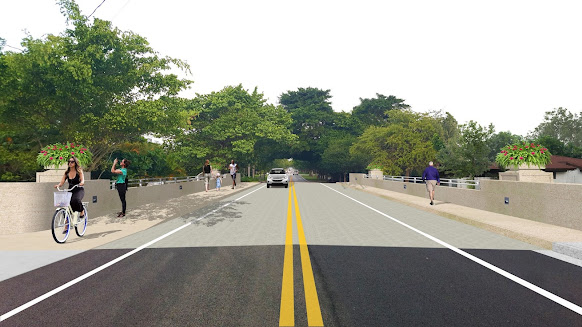