There's a Spanish idiom, in English literally "to throw the stone and hide the hand" which means "to start some kind of trouble and then not take responsibility for that"

The current Palmetto Bay mayor couldn't go 48 hours into 2020 before she stirs her behind the scenes proxies to attack fellow village council member David Singer. It is truly sad that Palmetto Bay could not make it more than 48 hours into the new year without the first behind the scenes attack from one council member to another. I term this as a textbook example of bad leadership because once again, our current elected officials, who put forth the public personas of being friendly and engaging in public, bear fangs once again (and far too often by proxy) to engage in an attack on the person and not on the discussion. 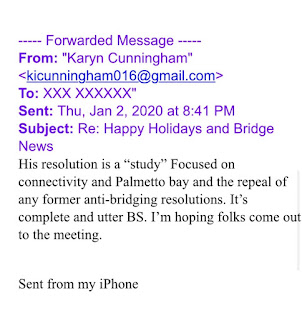 This comment made through this attached e-mail is, in my opinion, quite  unprofessional. We often disagree (that is everyone's right to disagree) but to denigrate a fellow council member is uncalled for, especially in such a crude manner in stating: “It’s complete and utter BS.”

Can we please have a return to civility and be positive: to bring your advocacy to the council meeting rather than tearing things down through building a mob behind the scenes? Especially when she, as mayor, hasn’t stated publicly her position on the bridges. And, by the way "hoping" is not advocacy.

Is the problem that she has nothing to offer on her own, so she resorts to rounding up others to come and attack in order to allow her to sit back and not take blame? She obviously does not want to discussion to be held - at least in the Sunshine of open government proceeding.

Speaking in riddles - different responses carefully tailored to different and opposing people? A common tactic for politicians without principles:

What does this response to a bridge proponent mean? From Mayor Cunnigham, 10-18-2019, advising a resident that "Our (meaning Palmetto Bay's) opposition is not keeping the county from moving forward if they deem it appropriate."

There are two ways to rescind a resolution.
The first is to put forward a resolution actually rescinding by stating that this current council has changed its position - and note there is no such resolution pending.
The second is to make sure that the resolution is ignored, to no longer back up that prior resolution.

The 10-18-2019 e-mail from Mayor Cunningham appears to state that the prior anti-bridging resolution exists on paper, but is not being actively pursued by this current mayor and counsel.  This is a backdoor way to allow things to happen, but deflect criticism for allowing it to happen.

This all relates back to Spanish idiom I opened this post with - "to throw the stone and hide the hand" which means "to start some kind of trouble and then not take responsibility for that.” It’s all about ‘don’t blame (Mayor Cunningham – who appears to be doing a great job at avoiding responsibility), who appears to be saying different things to different people and not going to advocate for or against the prior resolution, blame the County for what even happens either way.’ Leadership? Transparency? speaking straight to Constituents? Hardly. This is a coward’s way out. Palmetto Bay deserves better.

Postscript. Elected officials should use official Village e-mails, not personal or third party emails, when communicating with constituents on official business. The posted e-mail concerns an official agenda item; it is therefore concerning official village business. Why then, is the mayor not using her official village e-mail? Is this to enable her to avoid public records laws in regard to transparency in her communication to others relating to village business?
Posted by EugeneFlinn at 4:00 PM