Traffic calming - public works - leadership. What is happening with that lawsuit so critical to address an “emergency…”? Nothing, absolutely nothing.

Rumor has it (actually, well-placed sources that are honest)  that there is a deal pending that this suit will be ‘dropped’ (dismissed) in exchange for Miami-Dade County funding and installing the traffic circle at the intersection  of SW 87th Avenue and SW 174th Street. This 'rumor' has neither been admitted nor denied by Village Council. It just sits there - like the stalled traffic mitigation programs in the pipeline in 2018 (CLICK HERE to view October 17, 2018, Update on Palmetto Bay Traffic Projects - and further updates will be posted as available - under a different mayor and council and, therefore, different priorities. 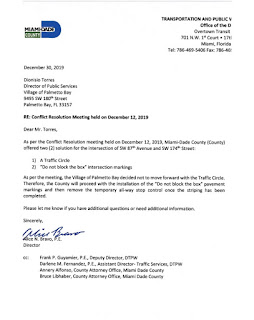 Back to the lawsuit. What is up with the lawsuit to protect public safety at 87 & 174? Neither the facts, nor the law are on the side of Palmetto Bay, yet it is strange that this is not being discussed publicly; that the allegations of the alleged deal were conspicuously not addressed at the Special Council Meeting held on Thursday, January 23, 2020. Item 3 of this meeting (III) was "A traffic circle on SW 87th Avenue and SW 174th Street.” The can keeps getting kicked down the road and, what, another ninety (90) days has been requested by the Village. Really? What for? The Village dodged a bullet of a prior January 17 removal date thanks to grassroots resident action (the ‘in spite of the elected officials’ result). See January 13, 2020, Palmetto Bay - salvage what you can before the door actually closes on the traffic circle for 174 and 87th Avenue

Will Palmetto Bay officials accept the inevitable on the traffic circle or, if not, why does it take 90 more days to simply say no to the county and move on the lawsuit? Is there another plan other than delay, delay, delay?

Experience matters as does maturity. It is time for Palmetto Bay to move forward on the traffic circle – and this should be done before the 4-way stop signs are removed and the “do not block the box (intersection)" paint is placed on 87th avenue.

Why must this important item of traffic safety proceed behind the scenes? How are the various members of the Village Council being advised/included without violating Florida’s Sunshine Law?

It is beginning to look more and more like there is deliberate foot dragging (if not actual hiding under the bed to avoid responsibility) calculated to make the county take unilateral action; just as the county did after the current Palmetto Bay Village Council denied the traffic circle at  SW 87th Avenue and SW 144th street which forced Miami-Dade County to step in and unilaterally install the 4 way stop signs.

This is all most irregular – no action, little communication, no leadership. Miami-Dade County removed a 4 way stop at SW 82nd Avenue and SW 148th Street in Mangowood in 2016 (which did lead to significant Village council uproar, but under a prior Mayor and Council). Things have certainly changed under this current mayor and council:
All this without a peep, and with no comment by the current mayor or other village elected officials.

There is no action (resolutions or other foreshadowing of discussion) relating to any of these areas listed on the official village agenda for the February village council meeting for Monday, February 3, 2020 (CLICK HERE to view the agenda as it was posted as of Friday, January 31, 2020).

It is all beginning to look like the current mayor and council continue to abdicate their responsibilities in order to simply throw shade and point fingers, all the while waiting on Miami-Dade County to tire of the endless delays and take action without them, thereby allowing Palmetto Bay officials to maintain plausible deniability and blame others – in this case Miami-Dade County.

The tool box on this issue - prior relevant posts:
Posted by EugeneFlinn at 5:00 PM