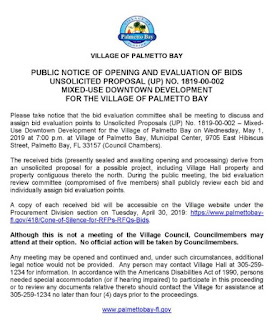 After all, the bids were unsealed on March 7. The original time frame determined by Resolution 2019-015  was for a review committee to convene and review in less than 3 weeks. It had been more than 7 weeks since the bids were opened without an announced date for the committee review.

Promises made. Promised DENIED: The Village Council had previously passed Resolution 2019-015 on January 7, 2019, requiring that the bid proposals be released to the public 7 days before the meeting.

The council may have stated in Resolution 2019-015 the following:


"WHEREAS, the transparency and public awareness of the bid and acquisition process of the Village is important in building public confidence in Village government ..."  (page 1, lines 21-23 of resolution - all emphasis added)

Bold promises made, but never kept. The resolution lay dormant from January until April 23, when promises made were revoked while others were simply not delivered. I speak specifically to the Special Council meeting, item 4.B, where the bold promises of the January resolution 2019-015 was drastically curtailed both in shortening access time to documents [item (2)] as well as not following their own bold promises on the 7 day notice [see item (3) of the resolution].

So when campaign time rolls around, remind the Mayor and Council of how they seem to be unable to stick to a theme, rights granted and then taken away, as this same village council voted 5-0 on April 23, 2019 to shorten that time period for review from seven (7) days to a mere day prior. That’s right, from one week to just the day before to review the documents.

(1) After opening of bids and study by individual staff members on the bid review committee, the review committee shall meet in a public meeting to discuss and assign bid evaluation points by individual staff members.
(2)Each bid shall be posted on the Village website and a copy of each bid shall be available for public review at Village Hall no less than seven (7) days prior to the review committee meeting.
(3) The review committee meeting shall be noticed no less than seven (7) days prior to the meeting.
(4) The bid evaluations shall be reviewed by the Council at a Council meeting for disposition as the Council sees fit in its discretion
(5)The Village Manager shall select two outside consultants, not from local government at a cost not to exceed $10,000 to participate in the five (5) member evaluation committee and the evaluation shall be completed prior to February 4, 2019. 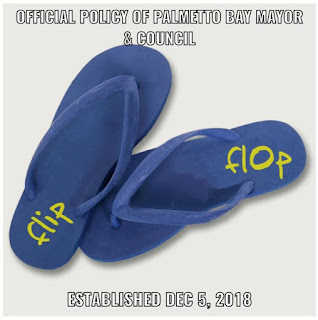 
The "deliverables" This is another glaring example of this current Mayor and Council Flip / Flopping on Transparency which has become an all too familiar theme. It shows why Palmetto Bay residents need to read everything on their own, stay up to date and monitor, unable to rely upon initial action as it is always fluid and subject to change.

Resolution 2019-015 provided for 7 days, approved 5-0, but then the entire Village Council Flip / Flopped at the special council meeting of April 23, 2019, drastically reducing the 7 day window for public preparation down to the day before (Agenda Item 4.B.) by the same 5-0 vote.

Failure to keep stated commitment on notice to the Public: The notice of for the meeting of the review committee meeting was posted 4 days prior to May 1 - not a full week, or 7 days as promised. I have posted a JPEG of this notice provided to me by a reader of SDU.
Posted by EugeneFlinn at 3:00 PM