"Context matters."
Many are watching the civil case of  JOSEPH PETITO, NICHOLE SCHMIDT v. CHRISTOPHER LAUNDRIE, ROBERTA LAUNDRIE, Case No.: 2022 CA 001128 SC, which is pending in the the Circuit Court in Sarasota County Florida.  This case arises out of the murder of Gaby Petito - and for those who want a refresher, please see: A timeline of 22-year-old Gabby Petito’s case, by Christina Maxouris, CNN, January 21, 2022. 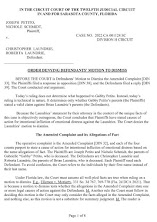 The facts of this case define 'intentional infliction of emotional distress'. I have attached a link to the eight page order rendered Thursday, June 30, 2020, by the Honorable Hunter W Carroll, Circuit Judge. Please note that the order is not a full adjudication of the claim. It merely finds that the Plaintiffs, the parents of Gabby Petito, have stated a legally sufficient case for intentional infliction of emotional distress. The next step will be the filing of an answer by the Defendants, the parents of Brian Laundrie. The Answer is due on or before July 15, 2022. This lawsuit is far, far from over and it remains to be seen who will prevail in the end.
Why sue the parents of the murder, what did they do? This case is more than just a statement that the Defendants released through their lawyer that gave the Plaintiffs false hope that their daughter was still alive. The Plaintiffs have alleged a course of conduct by the defendants where the Plaintiffs were toyed with, and knowingly giving false hope that Gaby Petito would be found alive and returned to her family.  This lawsuit seeks redress for a course of conduct and deceit from the defendants that caused severe emotional distress to the Plaintiffs - the parents of Gaby Petito.
The short bites:
According to the lawsuit, the Defendants' son murdered the daughter of the Plaintiffs on August 27, 2021.  The Defendant's son sent text messages to Gabby’s mother while posing as his fiancée after killing her. He then returned alone to his parents’ home in North Port, FL, on Sept. 1 and was reported to have traveled with his parents at Fort DeSoto Park from Sept. 6 to Sept. 7. The Plaintiff's Joseph Petito and Nichole Schmidt, Gabby’s parents, further allege that the Laundries ignored their frantic requests for information about their daughter; the Laundrie parents allegedly went so far as to block the text messages from — and the social media accounts of — Gabby’s parents on or about September 14, 2021.
Gabby’s remains were found on Sept. 19 near a camping area along the border of the Grand Teton National Park in northern Wyoming.
The Plaintiffs allege that Defendants Christopher Laundrie and Roberta Laundrie, “acted with malice or great indifference” and “exhibited extreme and outrageous conduct which constitutes behavior, under the circumstances, which goes beyond all possible bounds of decency and is regarded as shocking atrocious, and utterly intolerable in a civilized community.”
The defendants moved to dismiss the civil lawsuit and argue that they remained silent and, therefore, were acting within their constitutional rights — specifically the First Amendment free speech right and the Fifth Amendment right to remain silent.
Silence is one thing, but speaking through a lawyer, the agent of the Defendant is not silence. Though the court recognized that there was no duty for the defendants to respond to the Plaintiffs, to break their silence, the Defendant acted otherwise, putting out a statement:

“As alleged by the Plaintiffs, the Laundries made their statement knowing that Gabby was dead, knowing the location of her body, and knowing that her parents were frantically looking for her. If this is true, then the Laundries’ statement was particularly callous and cruel, and it is sufficiently outrageous to state claims for intentional infliction of emotional distress.” (Bold emphasis added)

As stated in the order:

“... Florida law recognizes that family members are particularly susceptible to emotional distress around the time of a loved one’s death. Malicious conduct during that timeframe can rise to the level of outrage.”

The judge ruled that the outrageous threshold was met when juxtaposed with the other conduct on the case.

“Plaintiffs have not identified, and the Court is unaware, of any legal duty the Laundries would have owed to Plaintiffs to tell the Plaintiffs that Gabby was dead or the location of her body,” Carroll wrote, adding that Joseph and Nichole similarly did not identify a duty the Laundries had to them that would require that they responded to their text messages “or refrain from taking a vacation” while Gabby’s parents searched for her.

The bottom line (so far):

If the facts of this case truly were about silence with no affirmative act by the Laundries, the court would have granted the motion to dismiss in the Laundries' favor."

Stay tuned. This is a very sad case.
Posted by EugeneFlinn at 11:00 AM