Update note - Monday- April 2, 2018.  I want to thank Mr. Pastorella for directing you to my blog, where for the first time he directs people to a source of information backed up by advice from professional land planners and village attorneys.  I have updated this post to provide some information regarding what, in my opinion, are the on again off again misstatements made by Mr. Pastorella and the CCOC group. My original post follows at the end of this update.

I have attempted to ignore and not respond to his endless attacks, however, sometimes politics does go too far and Mr. Pastorella oversteps the bounds of what I believe to be proper decorum and what is in the best for our community.  Mr. Pastorella appears to have no yearning to preserve native lands, even going as far as stating that "The buffer is not a pine rockland as the mayor has asserted in the past."

Are you kidding me Mr. Pastorella, not a Pine rockland? Who has ruled this is not a pine rockland? The Village Council has attempted to have this area designated as such in the past.

His real issue? Perhaps Mr. Pastorella prefers development on the 22 acres as he has announced what appears to be opposition to the village taking ownership of this land, stating that: "The Village’s Council’s approval will force the taxpayers to assume the unknown or hidden white elephant costs of a continuing maintenance and build out budget for the buffer and other areas." 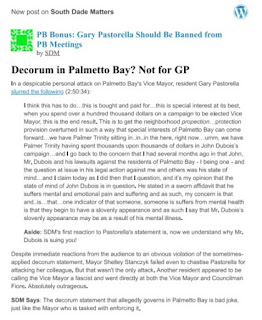 I am sure that his long time readers have observed that his attacks are not limited to me - he has in the past attacked many, including both Vice Mayor John Dubois - and at many times, going so far out of bounds, so personal, such as to allege "... Mr. Dubois slovenly appearance may be as a result of his mental illness...." as well attacking, suing, and then supporting (now) Council Member David Singer for election in 2016.  Gary Pastorella is back to attacking Council Member Singer.  This truly is one of those situations where fact is stranger than fiction. Mr. Pastorella has been involved in litigation with both Vice Mayor Dubois and David Singer.  A list of the lawsuits involving Mr. Pastorella are posted below.

I hear from residents concerned about Mr. Pastorella's endless attacks, but once again, it is not limited to me.  One only has to review past videos, past litigation to see that he appears to do what he can to evoke response and attention, good or bad.

There is a post from 2013 in the anonymous blog South Dade Matters - note that I am posting this verbatim (and clarification is indicated in brackets and italics - no claim of ownership is made to its contents) Here is the text from the 2013 post:

Decorum in Palmetto Bay? Not for GP

I think this has to do…this is bought and paid for…this is special interest at its best, when you spend over a hundred thousand dollars on a campaign to be elected Vice Mayor, this is the end result. This is to get the neighborhood propection…protection provision overturned in such a way that special interests of Palmetto Bay can come forward…we have Palmer Trinity sitting in..in..in the here, right now…umm, we have Palmer Trinity having spent thousands upon thousands of dollars in John Dubois’s campaign…and I go back to the concern that I had several months ago in that John, Mr. Dubois and his lawsuits against the residents of Palmetto Bay - I being one - and the question at issue in his legal action against me and others was his state of mind…and I claim today as I did then that I question, and it’s my opinion that the state of mind of John Dubois is in question. He stated in a sworn affidavit that he suffers mental and emotional pain and suffering and as such, my concern is that and..is…that…one indicator of that someone, someone is suffers from mental health is that they begin to have a slovenly appearance and as such I say that Mr. Dubois’s slovenly appearance may be as a result of his mental illness.

Aside: SDM's first reaction to Pastorella's statement is, now we understand why Mr. Dubois is suing you!

Despite immediate reactions from the audience to an obvious violation of the sometimes-applied decorum statement, Mayor Shelley Stanczyk failed even to chastise Pastorella for attacking her colleague. But that wasn't the only attack. Another resident appeared to be calling the Vice Mayor a fascist and went directly at both the Vice Mayor and Councilman Fiore. Absolutely outrageous.

SDM Says: The decorum statement that allegedly governs in Palmetto Bay is bad joke, just like the Mayor [assume that this blogger is referring to (then) Mayor Stanczyk] who is tasked with enforcing it.


Palmetto Bay residents have reason to keep a close eye on Mayor Stanczyk, who has recently demonstrated that she is willing to sponsor removal of a protective covenant in the name of unrestrictive development. Homeowners used to feel secure in zoning decisions when a covenant was put in place to protect them well into the future.  I believe I recently read something on the Eye on Miami blog where it was stated  “There ought to be a law. Oops, there is and Mayor Shelley Stanczyk of Palmetto Bay thinks there is a creative way around it. That’s what our lawmakers do: dodge the laws.”

Yet, I cannot recall a single peep from Mr. Pastorella on this effort at destroying 22 acres of Pineland that should be preserved.

I choose to maintain decorum.  I do want to correct the record and let my readers know that there are many, many instances of Mr. Pastorella attacking others.  The photo below is representative of some of the disputes that Mr. Pastorella has undertaken with others. 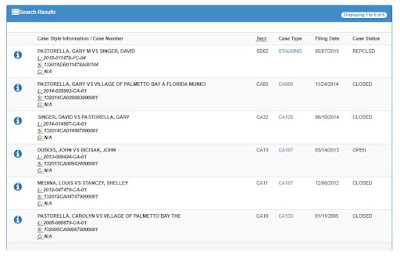 Monday, March 19, 2018, was a very positive day for Palmetto Bay and for everyone who values preservation of endangered lands, properly controlling development and who wanted to see less, not more density along Old Cutler Road.

I am providing several positive points that result out of 3 out of 5 members of the village council diligently working together:

Please CLICK HERE to Download and/or view the presentation made by the Village Planner addressing the Village Mixed Use (VMU) District and explaining the main differences between the development approvals given in 2008 and in 2016, along with recent traffic data gathered impacting the site's development.

I am proud to have voted with Councilman Singer and Councilwoman Siegel Lara to protect 22 acres of pine rockland from development right along Old Cutler Road and lower the cap of development down to 389 units – a number less than the 400 units, plus a hotel, plus probable development on the pineland that the Vice Mayor’s Ordinance would have allowed.  It is unfortunate that this was not a unanimous action. The Vice mayor and one council member don’t want resolution, but want instead to place our village at risk for uncontrolled development along Old Cutler Road by repealing the traffic safeguards put in place on May 2, 2016.

Why would the Vice Mayor and another council member vote against reducing traffic along Old Cutler Road,  Why would they vote for more development, to put 22 acres of valuable pine rockland back on the development block – a vote that risked an absurd possibility of a total of 680 units on Old Cutler Road. This was a time for reasonableness and evidence, not emotion and politics.  It is undisputed that the Palmetto Bay Village Center owners have vested rights to 400 units on their main property, plus rights to development on the sensitive Rock Pineland. The ordinance passed on first reading caps all development at 389 and could go lower – and protects the Pine Rocklands.

Think about the difference between 680 units verses 389 on Old Cutler Road.

Transparency is not the enemy of staying current as information and/or evidence develops. Facts and evidence often changes between the time an item is placed on an agenda and action is actually taken at the meeting. To argue against any modifications, actions taken at the meetings, would restrict all votes to a simply “yes” or “no” on an item as it was placed on the agenda, irrespective of the testimony by residents or experts at a hearing.

Transparency is how you handle an item to conclusion.  Councilwoman Larissa Siegel Lara, Councilman David Singer and I agreed that the Singer amended ordinance shall not reach final vote without at least two (2) public hearings (not including Monday, 3/19) and the final vote will take place on the same date as the zoning hearing on any site plan application made by the Palmetto Bay Village Center.

The amendment to the Ordinance protected the village from the harm that may have occurred had the original Ordinance been approved.

This is a great day for Palmetto Bay and for everyone who values preservation of endangered lands. We have a park and protections from rampant development along Old Cutler Road.