Great response to our solar initiatives. Thank you to all who have participated.

I am posting some of the outstanding responses to our Solar Initiatives.  I am working hard to bring Solar to Palmetto Bay, including as a "Green Corridor Advisor".

Spoiler alert - you don't have to read all the way down to see the success to date:


40,108,500 pounds of carbon offset over the lifetime of these systems

I have sponsored many green initiatives. Under my leadership, Palmetto Bay is currently one of ten (10) Miami-Dade County municipalities that have waived all or at least 75% of permitting fees for solar panels: Town of Cutler Bay, Coral Gables, Surfside, Miami Beach, City of Miami, Miami Shores, Miami Springs, Doral, Palmetto Bay and South Miami. 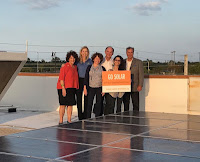 Thank you Jody for your hard work and the sunshine that you spread.  Click the link to view the prior article of April 12, 2018, Solar United Neighbors - time remains to join and save -

Jody's report is below.

Our final of the six co-ops closed on Monday with 170 homes signed up! The first installation is complete and a second scheduled with 12 additional signed contracts and counting!

I cannot thank you enough for the support, encouragement and funding to spread the sunshine across Miami-Dade County.


The final numbers for the entire year are:
968 leads
604 sign-ups to participate in co-ops
94 contracts and counting
$2,129,613 spent on installs and counting


40,108,500 pounds of carbon offset over the lifetime of these systems

Your Mayor (and environmental advocate)

Posted by EugeneFlinn at 5:00 PM