And then there were three (3). The daily update was released and verified up to 5:00 PM. It is really time to get testing set up in a locale closer to Palmetto Bay. 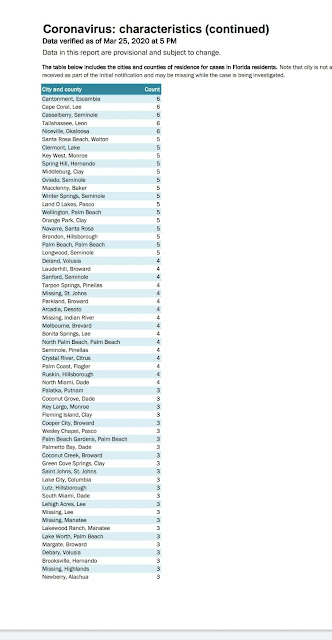 Palmetto Bay Village Council Member David Singer originally broke the ice on the prior silence, releasing the initial report of the 2 previously confirmed cases of Coronavirus here in Palmetto Bay. Updated figures were released as of 5:00 PM, today, Wed., 3/25/2020.

No cases have been report so far in either Pinecrest or Cutler Bay. This does not mean there are no cases. This means that no one has been tested positive at this time.
It is clear that case numbers follow testing. We need testing sites set up in South Miami-Dade County. I am told through County contacts that one site is set to open in West Kendall and an additional site is possible at the South Dade Government Center.

Posted by EugeneFlinn at 8:00 PM