Currently available on Community Newspapers online: Court rules against the Village of Palmetto Bay in Luxcom case, by Michael Miller, Editor.  $750,000.00 Please, I want to be kept in the loop! My question: Have Palmetto Bay officials spent  more than $750,000 in the different legal matters with Luxcom through October 2021? Obviously that wouldn’t cover all the critical filings leading up to the March 31, 2022, hearing or the Answer and Affirmative Defenses filed late last month. What’s the actual legal bill to date? What is the total budget set aside for this litigation? There are more costs that mere legal. What about overall staff and consultant (administrative) costs that should be associated to this Luxcom matter?

The Palmetto Bay public has a right to know. And the Palmetto Bay elected and staff officials have the duty of candor to the public.  Editor Miller's report raises some alarms as this is not the story that I have been kept in the loop about. This matter has clearly turned into a grudge no holds barred match.  Editor Miller reported on the recent loss that the Palmetto Bay community suffered in court on March 31, 2022.  Background, for those not in the loop, Editor Miller explains that Yacht Club by Luxcom, LLC “… has sued the Village of Palmetto Bay to recover more than $20,000,000.00 in compensation for losses caused by the Village’s efforts to prevent Luxcom from developing its property.

I, myself, have attempted to keep readers in the loop through some of my blog posts (listed at bottom).  Editor Miller reached out for comments from Luxcom, a source we, the people, have not heard from, speaking to a Mr. Barbara, who is the developer of Luxcom.  As Editor Miller explains it:

When asked about the litigation Mr. Barbara responded – “We are pleased that the Court saw through the Village’s tactics and we look forward to moving vigorously and swiftly with discovery and the preparation for trial in what will be an expensive case with tens of millions of dollars at risk to the Village and its tax payers. As a result of the Court’s ruling, the lawsuit will now proceed forward on its merits, and the Village will finally be held accountable for its conduct and the harm it caused to Luxcom’s property.”

Barbara added – “additionally, documents obtained through their Public Records Request show that the Village has already spent more than $750,000 in the different legal matters with Luxcom through October 2021, and this case has just begun.”

This is huge and I do believe the taxpaying public is due a full and complete accounting as to the following:

Transparency and accountability is important as Editor Miller specifically stated that:

“When Mayor Karyn Cunningham was asked to comment about the most recent court ruling, she said that because it was an ongoing case, she could not comment and directed any questions to the Village Attorney.”

No, that is deflection, avoidance. The people have the right to know. Legal strategy is one thing, but providing a realistic assessment of the goals, costs to date as well as reasonably expected future costs of this litigation is the public’s right to know. 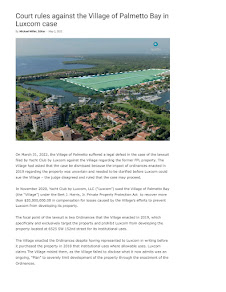 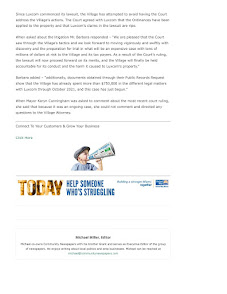 Posted by EugeneFlinn at 3:00 PM