More litigation! In fact, a second lawsuit was filed April first (no joke) along with the Cert action. This case is styled 17777 Old Cutler Road, LLC, v. Village of Palmetto Bay, Florida, Case No.: 2022-006141-CA-01 details and links provided.

But let's get right to the FAIR QUESTION: Why is the Palmetto Bay village staff RECOMMENDING APPROVAL for projects that the Palmetto Bay Mayor and Village Council oppose?  Is staff not following and implementing the policy of this mayor and council or do we have a mayor and council that refuse to follow the recommendations of their own handpicked staff?  Why is there a conflict? 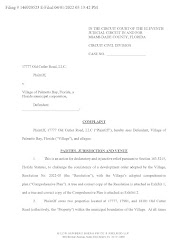 This second case is an action for declaratory and injunctive relief pursuant to Section 163.3215, Florida Statutes, filed to challenge the consistency of a development order adopted by the Village, the denial in the development order contained in Resolution No. 2022-05, with the Village’s adopted comprehensive development master plan.

Allegations contained in this second complaint:

The allegations include the fact that the Village’s professional staff reviewed the Application and prepared an exhaustive report. The written staff report (“Staff Report”) and the testimony of the Interim Planning and Zoning Director at the quasi-judicial hearings on the Application confirmed, among other things, that the Application was consistent with the Comprehensive Plan, zoning ordinances, and code provisions. The staff recommended approval of the Application.

This suit also alleged that the Village conducted three quasi-judicial public hearings on the Application. Plaintiff presented expert testimony and reports in support of the Application and its compliance with the Comprehensive Plan.

The Plaintiff alleges, and this is extremely important, that Palmetto Bay “… did not present any evidence other than the testimony of the Interim Planning and Zoning Director and the Staff Report, which (again) recommended approval of the Application.”

INITIAL IMPACT: The allegations raised by the applicants in the PBVC matter demonstrate why the current mayor and councils in place between 2019 to date may have harmed the village taxpayers by not  moving forward on the rescinding ordinance, but, instead, acting as if they were not required to. The so-called ‘fix’ was presented (at least the taxpayers funded one). Again, it passed on first reading, but the present mayor never followed through with it or accounted for why she failed to follow through.  See April 4, 2022, Palmetto Bay officials play the blame game through proxy. The blame lies with the current mayor, as it was her failure to follow through on the2016 ordinance repeal. An ever expanding broken record of litigation funded by the taxpayers, who should remember in November!

NEXT STEPS: I am waiting to see when the village was served and if so, what the initial response of the Village will be. Will the village file an Answer and defend on the merits or will attorneys for the Village attempt to get this suit dismissed?

Email ThisBlogThis!Share to TwitterShare to FacebookShare to Pinterest
Labels: Litigation