Facts are facts. Here are the facts concerning the SW 136 Street Bike Lanes project: It is a Joint Project (JPA) between Miami-Dade County and Palmetto Bay.

You can't blame Miami-Dade County for the change from a bike lane to the MEGA (8-10 foot) shared path. The current Mayor and Village Council of Palmetto Bay had control over the project design. (* see last paragraph below for an explanation of a JPA).

The original plan: (Prior administration) The Palmetto Bay Village Council adopted Resolution No. 2017-47 approving the Joint Participation Agreement (JPA) with Miami-Dade County to construct a bicycle lane along SW 136 Street from US1 to Old Cutler Road.

It was the Village of Palmetto Bay that negotiated a contract with RJ Behar as the design team.

Miami-Dade County may be the ‘owner’ of SW 136 Street, but it was Palmetto Bay officials who negotiated and paid for the Design Team, and, therefore had full control over the design. The JPA is clear that it is the Village of Palmetto Bay that is providing the design of the Project at its (Palmetto Bay's) sole expense.

Therefore, it is disingenuous for any Palmetto Bay elected official to deny Palmetto Bay's substantial participation and oversight in this project; to claim that the shared path is the County’s project.  This is simply not true. Palmetto Bay’s paid design team, RJ Behar, changed the plans from the bike lane to the shared path soon after the change in the Palmetto Bay administrations (December 5, 2018).  All this was accomplished without a single public meeting or discussion providing any notice to the general public that a change from bike lane to shared path was even being contemplated.

Bottom line (the facts): The current administration: the mayor, vice mayor and council members, are to be held responsible for any notice, or in this case, lack of notice as well as lack of inclusion of the residents who are most affected by this project.

*  What is a Joint Participation Project (JPA)? In short, it is a working agreement, a contract providing for shared responsibility for a multi-governmental project.
Notes of the Miami-Dade County Board of County Commissioners Meeting of October 23, 2018 (research notes): 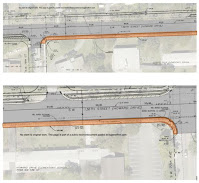 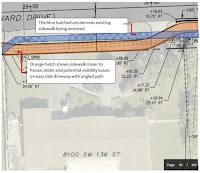 Posted by EugeneFlinn at 3:30 PM