Q: How much does it cost to leave your garbage can out in Palmetto Bay? A: $150. Palmetto Bay has gone mad.

Palmetto Bay Code Enforcement issuing $150.00 tickets to homeowners - for leaving their garbage can out too long! Have our Palmetto Bay officials gone nuts? 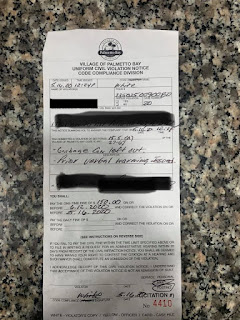 (Name redacted) I’m a bit upset at a PB inspector. Last week he apparently came by my house and states he gave a verbal warning to someone.... that the garbage can was out.... funny thing is I didn’t even take out the garbage on Tuesday.... he then returned to my house Saturday morning and left a $150 citation in my door because my garbage can was out! None of my neighbors seem to have received citations and saw multiple garbage cans out. It was pouring rain and couldn’t bring it in before leaving to work at the hospital. This is ridiculous! Since when are garbage cans citations $150? And much less when it’s not enforced unanimously!!!!!"

As one person commented: "Regardless, $150 seems quite excessive!!!!"

OMG. This certainly marks a new direction for Palmetto Bay. In some places, a friend, neighbor, or even a government official would bring in the can. Believe me, it takes much more in village resources to make good on a $150.00 ticket.

This is insensitive. So many people are losing money (and their sense of well-being) during this coronavirus and this is how they are being treated!

I give this ticket a ZERO PERCENT chance of holding up in court (a hearing before the Palmetto Bay Special Master).

Could it be that Palmetto Bay officials are so desperate to fill an alleged (yet still unconfirmed) $1 million budget deficit that they plan on making it up $150 at a time against our valued residents?

I'm calling BS on this one. This is a garbage punk move by an administration that is at war against its own residents.  How about issuing $150.00 tickets to the current mayor and council members for blowing up the current Palmetto Bay budget and costing us in time, services and increased taxes?
Posted by EugeneFlinn at 12:00 PM