Yet another car v bike conflict along the Old Cutler Trail – a multi-use path, not a dedicated bike lane.

I have personally witnessed numerous motor vehicle v. bicyclist accidents along the Old Cutler Trail - accidents at the entrance of Thalatta Estate, the library and at the commercial strip just north of SW 168th Street (where the 6/24/2020 incident occurred). Drivers are watching for cars on the roadway. Pedestrians can stop with the next step, but cyclists travelling anywhere from 12-20 MPH cannot. 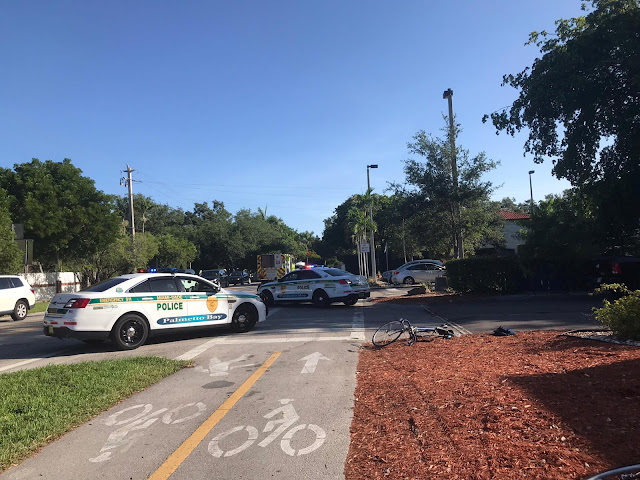 PRIOR RELATED POST:  Bicycling rules of the road - for cyclists and motorists

The Old Cutler Trail is not a protected bike lane. Too few are willing to acknowledge that the bicycle is legally defined as a vehicle and the bicyclist is a driver under the Laws of the State of Florida (see Florida Statutes, Chapter 316.2065 Bicycle regulations.—). Bicyclists have the same rights to the roadways, and must obey the same traffic laws as the drivers of other vehicles. These laws include stopping for stop signs and red lights, riding with the flow of traffic, using lights at night, yielding the right-of-way when entering a roadway and yielding to pedestrians in crosswalks. 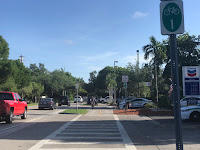 Predictability is a huge factor in preventing accidents. Drivers look for the oncoming motor vehicles before they make turns. Cyclists on a multi-path are often far from the focused field of vision for motor vehicle drivers, especially if the cyclist is riding on a multi-path in a direction that is counter to the direction of the lane it is adjacent to (e.g. riding southbound on the Old Cutler Path, which is adjacent to the north bound lane of traffic on Old Cutler Road). Cyclists are often obscured by these vehicles and have moved into the path of the vehicle by the time the oncoming traffic has cleared.

The bottom line is that a multi-path is not a protected bike lane and anyone who thinks these paths are “safer” than bike lanes are fooling themselves (and putting people at risk). The accident today is not an uncommon occurrence. In fact, many are slight conflicts (thankfully) and therefore are not even reported.
Posted by EugeneFlinn at 10:00 AM