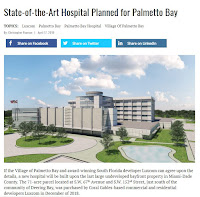 June 11, 2020, will be a very important day for Palmetto Bay residents.  Deadlines are approaching. Has anyone heard anything relating to Palmetto Bay aggressively defending the 1 unit per acre zoning put in place for the LUXCOM property? Defending the Bert J Harris claim served by LUXCOM (VIEW HERE)

The timeline is important - the 150 day pre-suit period expires June 11, 2020 (unless an extension was agreed upon). Palmetto Bay was required to either make a written settlement offer or state that Palmetto Bay will take no action.

The word is that negotiations have been ongoing; that the Village of Palmetto Bay has made the following offers to LUXCOM (note that it appears there is nothing in writing):
My first question is what authority does the Village Attorney have to make these offers? Is there an agreement between the mayor and village council members? There were no executive sessions - these are held outside of public view, but transcripts are recorded and those are released to the public after the litigation ends. Are the offers made in a "If we, would you?" sense, requiring approval by the village council after a public hearing? Or as alleged through an anonymous source; were the council members polled?  Polling would be troubling as that is a question in the abstract and removes the public and public hearing from the ongoing zoning issue.

This is not poker where players are dealt random cards from a deck, and which the cards are unknown to other players. There is an art to bluffing in poker. But litigation is not poker. We are dealing with real life issues with $21 Million liability to the village taxpayers plus future development at stake. Palmetto Bay can't hide our cards in this real life claim of Bert J Harris. It is tough to properly evaluate without seeing the preparation, the due diligence, of Palmetto Bay in defending the residents on this attempt to dramatically upzone this property.

Another concern is arbitration. I have no confidence in this administration in binding arbitration - why? Arbitration sounds a lot like the 12/12/2019 dispute resolution event in an unrelated case against Miami-Dade County for traffic signs. That did not go well for Palmetto Bay – see: January 7, 2020, South Dade Updates Guest Blog- view of the 12/12/2019 Palmetto Bay / Miami-Dade County conflict resolution proceeding [Let’s hope the Village has learned from this 12/12/2019 debacle and will be better prepared for this round involving a potential $21,700,000.00 plus Bert J. Harris claim – we are talking serious money $$$ ($21 million plus) here, not stop signs].

Fair questions:
This is a lead in to some small bite articles detailing this important LUXCOM issue. Watch this space for update articles. 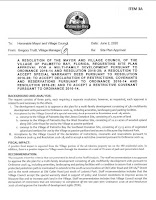 Is this yet another example making promises and then failing to deliver? Posturing and delay over resolution in line with the promises? Many are shocked that the Mayor Cunningham's administration has recently endorsed 480 units for the Palmetto Bay Village Center (PBVC) (see the Interim Manager's report). This after an election where the her promise was to stop the alleged over development. (See June 2, 2020, 480 Units at the Palmetto Bay Village Center - Village tax dollars were used to create a record that supports the applicant for this zoning hearing. Is this what you voted for?). We are all waiting to see how this "480" recommendation shakes out when and if this actually goes to an actual zoning hearing where the votes are taken. Or will the PBVC be also settled through subsequent court action, where this mayor and council can claim plausible deniability?

Now we, the residents, need to be concerned whether there is even more political backpedaling, this time on LUXCOM. The one unit an acre zoning was represented as fully defensible by both the Mayor Cunningham and Vice Mayor DuBois. If it ism then why the offer for significantly more units? Once again, the issue is whether this promise and council action - setting one unit an acre - will be aggressively defended or will the political realities and promise breaking rear its ugly head once again.

The bottom line: LUXCOM has few true expectations of unit rights. Why?
LUXCOM is significant. This may be the first time ever that a Palmetto Bay mayor and council upzone any property, increasing density. This property has important distinctions from the Palmetto Bay Village Center (PBVC). First of all, back in the 1980s, the PBVC won a court-order right (against Miami-Dade) to over 1,400 residential units on the 80 acres long before Palmetto Bay residents ever though of becoming a municipality. Palmetto Bay officials have worked hard to whittle down the number of units over time. LUXCOM is an attempt to actually INCREASE the number of units.

January 17, 2020, A medium length primer on Bert J. Harris Act claims. What we can expect (including a timeline). Link to Bert J Harris Act provided.

There are a total of 31 blog articles relating to LUXCOM - CLICK HERE
Posted by EugeneFlinn at 2:00 PM