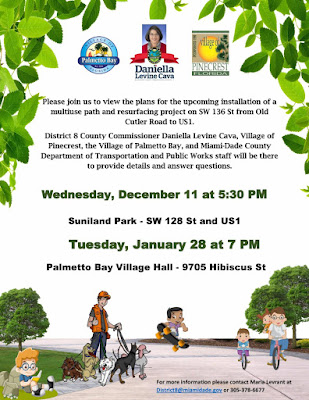 Two meetings upcoming - one directed toward Pinecrest and the other held at the Palmetto Bay Village Hall.  Why not hear from all residents at once? Will the information be the same?

The Pinecrest meeting is set for Wednesday, December 11, at 5:20 PM. This meeting will be held at Sunniland Park - SW 128th Street and US1.

The Palmetto Bay residents will need to wait for more than a month for their meeting: Tuesday, January 28th at 7 PM - and the meeting is set to be held at the opposite end of Palmetto Bay - at the Village Hall, 9705 Hibiscus Street. (Note that I was told that the date for completion of the final design for the MEGA sidewalk project is alleged to be February 14, 2020).

Regardless, thank you Commissioner for scheduling this meeting. It is long over due, see a PRIOR RELATED POST of November 8, 2019, Time is past due for a Public Meeting to engage and update residents regarding the SW 136th Street Project

OTHER PRIOR RELATED POSTS:

UPDATES - in response to some inquiries received:
Why is Palmetto Bay receiving a last minute meeting date? Shouldn’t there be a single joint meeting where all share the same information?

It’s a fair question. Should not the meeting be as early as possible if the plans are in progress, set to be finalized no later than February 14, 2020? The January 28 meeting is a mere 12 working days before the design deadline.  This late date appears to provide too little time to address the concerns, if any, from those who will lose 100% of the right of way in front of their homes to the MEGA sidewalk. And why not hold the meeting nearest to those affected? The 2017 meeting was held in easy travel of all who would be affected – at Howard Drive Elementary (HDE). And why, when Palmetto Bay is rumored to bear the brunt of the MEGA Sidewalk (up to 10 feet wide), is there meeting being set at a distance of 4.1 miles of driving (HDW, from SW 77th up SW 136th Street to US1 to Village Hall). The Pinecrest meeting is somewhat earlier in the process, set at a much better time and location, accessible to those most involved; a mere 1.2 miles from the Howard Drive location. Ironically, people could easily bike, or even walk from HDE to the Sunniland location, but this is not realistic for those in Palmetto Bay to reach the meeting at Village Hall as easily as their Pinecrest counterparts.

Proposed Solution: Perhaps the best solution is to hold a single meeting at Sunniland Park (3 miles less travel for all) with a makeup meeting in Palmetto Bay. Let everyone hear the same information and the same reaction. 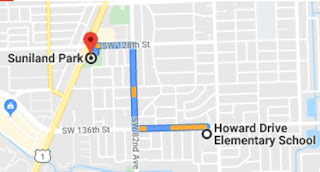 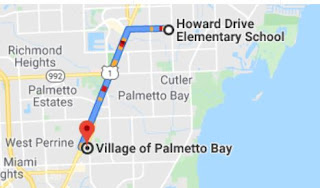 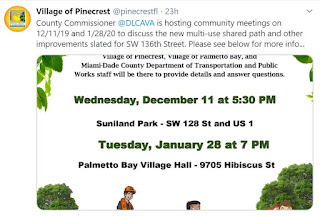 As confirmed through an official tweet from the Village of Pinecrest (pictured right, posted 12-4-2019), the two meetings are set by our County Commissioner. It appears that Palmetto Bay would not be having a public meeting for the area stakeholders but for our commissioner's efforts at public involvement.