Public services for some. Perhaps there is a political order. Friends and allies first?


During the campaign of Mayor Cunningham, one of the items she made a big deal of was her “Street by Street Initiative.”  So far, all I see out of this initiative is an opportunity for our mayor to have taken another selfie.

Since October 31st, when FPL came by and removed the street signs in order to completely kill the property values of a few homes in Palmetto Bay by putting huge power poles practically in the yards of my neighbors, the signs have not been replaced. Even with several calls to the Village Public Works Department, the signs are missing, or laying on the ground.

So far, the only things I have seen happen is for a crew to come by about two weeks ago and decide to leave one of the signs on the ground, and take the other away.

After a month and a half, the corners of SW 148 St/SW 75 Ave and SW 148 St/74 Place are still without street signs.  I know that the crew that came by took one of the signs because they said it was damaged and in need of repair.  I don’t know what this would have to do with the other street sign that is still laying on the ground.

I am not impressed.
(UNSIGNED) 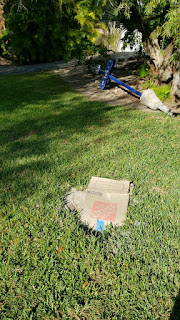 EDITOR’S NOTE: The statement I posted above was sent to me by a FOSDU, but the person asked to remain anonymous. This post stands out to me for two reason, the first is the difference between actual service levels most receive from that presented on village controlled social media.

The second is this is what happens when you remove village operations from the Manager and Staff and create a process where it becomes political. It becomes more important to make a 'bid splash' for the photo ops than making sure our 'quiet residents' are taken care of in a timely manner.

The 'Street by street' should be an end of this current Mayor and Council scapegoating the manager and staff as now the council is directing provision of services. They own it.

Non-political public services means priorities are established as to what needs done, regardless of location.

Politicizing public services means its more likely for our elected officials to see that those who will send praise out on social media get served first, even if that means the quiet residents have to wait longer.

How has the process been going? Information is being carefully controlled in Palmetto Bay. It started with the current Mayor and council placing the shade down over transparency by removing agendas, minutes, full resolutions from the website that actually documents what is going on in the Village, how tax dollars are being spent.

The next step that followed was replacing that information with the self-promotion and carefully crafted controlled information – some might call propaganda.

And that, my friends, is where the term 'selfies over substance' came about and we certainly saw evidence of that at the most recent State of the Village Address.

And finally, why do some areas seem to receive all the attention at the expense of others? The answer is obvious, services based upon political favoritism, rather than professional management.

Let's get those signs reinstalled. They weren't cheap. Someone may have an accident, either through inability to know their precise location or possibly even running into the signs.The manager and staff would have had it done long ago, but they probably don't have time to go off list (or possibility the authority to go off list).

IMHO
Posted by EugeneFlinn at 5:30 PM