Post update - 12-5-2019. 6:00 PM - apparently my "spoiler alert" (below) proved to be accurate. Information not provided form the village can be obtained from other sources. The Village released an email advisement (mine was released to me at 5:06 PM) advising of the following: 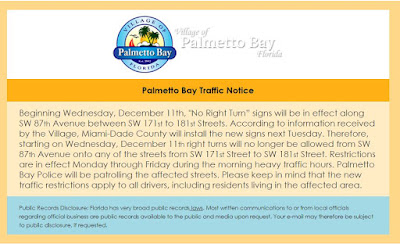 There is still no information as to whether this resolves the need for the conflict assessment meeting (it does not if the village intends to go through with further litigation), so my original post remains as originally posted:

What are your plans for 2:00 PM, Thursday, December 12? The future of 87th Avenue, the bridge or no bridge, 4-way stop or no way stop or traffic circle for the intersection at 174th may take shape in this meeting. Those interested in the outcome should appear, especially as the village council has not held a public town hall meeting to take public input on the desired actions. (SPOILER ALERT - a possible outcome may already be in the works, privately, pre-meeting - listed at bottom of this post)


NOTICE OF CONFLICT ASSESSMENT MEETING IN THE MATTER OF:
VILLAGE OF PALMETTO BAY VS. MIAMI-DADE COUNTY, FLORIDA
CASE NO. 19-03136 CA-01

NOTICE IS HEREBY GIVEN that a Conflict Assessment Meeting shall be held on Thursday, December 12, 2019 at 2:00 p.m. at Village Hall, 9705 E. Hibiscus Street, Palmetto Bay, FL 33157 pursuant to Case No. 19-03136 CA 01 (Village of Palmetto Bay vs. Miami-Dade County, Florida). This Conflict Assessment Meeting is in reference to the matter regarding the intersection at SW 87th Avenue and SW 174th Street whereas the Village adopted Resolution 2019-137 on October 22, 2019 to initiate conflict resolution for this intergovernmental dispute. More than three Councilmembers will be in attendance during the meeting along with Miami-Dade County representatives. 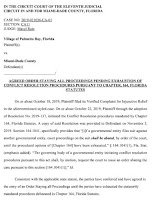 What is this meeting about? You can find background relating to how the Village got to this meeting through reading a PRIOR RELATED POST of November 20, 2019, Litigation Update. Court approves agreement between Palmetto Bay & Miami-Dade County to stay proceedings pending exhaustion of conflict resolution procedures. Consider the information provided part of your 'toolbox' to prepare to observe this meeting.

What will happen? We will need to wait and see.

PAST POSTS have discussed the buzz around the village is whether the current Mayor and council overstepped their authority in reaching a formal agreement with Miami-Dade County, through the Department of Transportation and Public Works (DTPW) without bringing the proposal back to the residents. It is a fair question as others have wondered whether this lawsuit is an abject 'abdication of responsibility' of the responsibility of their elected office as spelled out in the Village Charter for Mayor Cunningham and the entire Village Council to maintain civility, communication and advocate for Palmetto Bay with Miami-Dade County.

Is the lawsuit nothing but an attempt to weasel out of the commitment represented by Village elected leaders to support the traffic circle and force a four way stop as a permanent measure despite an agreed-to short term stopgap? Or is this lawsuit a passive-aggressive back-door attempt to have Miami-Dade County take action on the bridge in order to enable this current Mayor and Council to deflect responsibility (or privately take credit?) for the action? This lawsuit and the Conflict Assessment Meeting may provide some insight. Look for what is said, and what is NOT said at this meeting.  For more background, please review a past post of October 25, 2019: Thoughts on the most recent litigation FILED by the village: Good faith or is this a less than good faith attempt to avoid a deal that the Mayor and Council had no authority to make?

SPOILER - possible resolution already in the works -  Miami-Dade County appears ready to approve seven (7) No-Right Turn signs along 87th avenue. Cost and responsibility of enforcement would fall upon the Village of Palmetto Bay. Note that this would be the most cost effective resolution for Miami-Dade County. The cost of signs is minimal, especially when compared to the cost of the traffic circle the County had previously agreed to fund.

So much happens outside of public view under this current mayor and council. The meeting may end being little more that public notification of agreement, depending upon who from the public appear and whether there are any objections to the No Right Turn sign proposal.
Posted by EugeneFlinn at 7:00 AM