Are we reaching the end game? What is the strategy and what is the long term goal of the current Mayor and Village Council Members? Fire by volley. 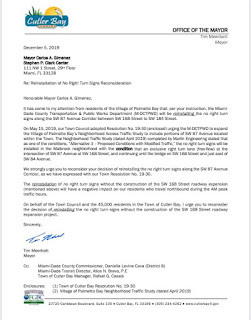 Mayor Cunningham and the Palmetto Bay Council have made their move. The County has stepped in and is now installing the No Right Turn signs.

Does anyone remember how that worked out last time?

Cutler Bay does and now Cutler Bay is countering with stated objections (see letter of 12-5 directed to County Mayor Gimenez). CLICK HERE to download and read the complete letter of December 5, 2019, full size with attachments. The attachments include Cutler Bay Town Council Resolution 19-30, approved 5-0 on May 15, 2019, along with a 2 page excerpt of the Village of Palmetto Bay Neighborhood Access Traffic Study.

I ask that readers take a very close look at what is contained within the letter. It relates back to promises broken by leaders of the current Palmetto Bay council.  I have a link posted below to a prior blog post - October 25, 2019, Thoughts on the most recent litigation FILED by the village: Good faith or is this a less than good faith attempt to avoid a deal that the Mayor and Council had no authority to make? This post specifically identified and discussed this leadership crises - this is just more fall out caused by making a hand-shake deal then running from it.

I was under the impression that Mayor Cunningham has called for cooperation between the local municipalities, at least at the recent State of the Village Address. Now I have to ask the question as to whether there was any collaboration with our partners to the South regarding these newly replaced No Right Turn signs? Was nothing discussed or worked out at any of the District 8 Meeting of the Mayors or the South Dade Municipal Coalition meetings?


Again, I have to wonder if this is all part of a hidden agenda to force the hand of the County to act in a manner that provides cover for our local officials to have it both ways - the ability to be able to tell different groups conflicting messages and not have to make a hard decision in public, on the record. 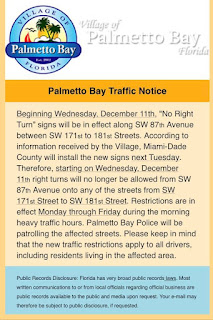 Question for readers to consider:
The prior Village of Palmetto Bay Council passed resolution 2015-101 back in November 18, 2015. Signs were installed. Does anyone recall the result and why the signs were removed?
Now, in 2019, is this simply being done with a hope that things will be different or are new traffic measures in place, or ready to go into place to bring about a better result?

Transparency demands an answer from the current mayor and all the current sitting members of the Palmetto Bay Village Council.

More lawsuits on the Horizon? Is anyone else hearing rumors that this current move will trigger the Cutler Bay Town Council taking a page from the Playbook of the current Palmetto Bay Village Council and initiate a lawsuit, this time against the Village of Palmetto Bay as well as Miami-Dade County?

August 2, 2019, A full update of the Malbrook Traffic and other traffic calming issues - to the extent that the information has been made readily available.

October 25, 2019, Thoughts on the most recent litigation FILED by the village: Good faith or is this a less than good faith attempt to avoid a deal that the Mayor and Council had no authority to make? 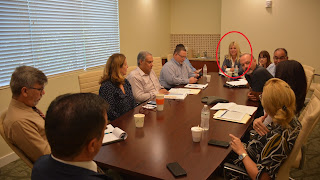