Dover Kohl Group's suggested changes to the DUV have been released to Village Council.

The suggested revisions to the DUV code arrived late this afternoon (Thursday, June 28, 2018). 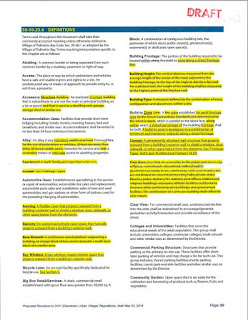 Palmetto Bay Manager Ed Silva has released the DUV code revision as proposed by the Dover Kohl Group.  The document is large as it contains graphics and, therefore had to be divided into 3 parts (with section 2 having parts A & B) due to its size, in order to be small enough to e-mailed to the council.

I have asked for this document to be posted on line.

Staff is working at the present time to upload the complete package to the official village website.  This task may not be accomplished until near close of business day tomorrow, Friday, June 29, due to the size of the package.

In the interim, Here are the Dover Kohl suggested revisions to the DUV code placed in a drop box for you to download and review:

I am reviewing the current suggested revisions and will discuss these proposals at a public town hall meeting.  Join with me twice on July 13th.

I remain proud in setting a standard for public participation.  I have been consistent and once again invite everyone to listen in/participate in my official briefing/meeting with the Dover Kohl Group, prior to the public meeting. My official meeting is set to take place at 2:00 PM on Friday, July 13th. Other separate meetings are set that same day with the other Village Council Members. The general meeting is set for early evening, 7:00 PM, the same date, July 13.

I have asked that the Village Council Chambers be set up to be the site of this meeting to accommodate interested residents.

Being one of the few elected officials who has never met privately with a developer about a zoning matter, and meetings (and there has been only one), has been held in public. In fact, 3 out of 5 village council members have held such meetings in the public. I want to thank Council Members David Singer and Larissa Siegel Lara for doing what is right and joining me in increasing transparency here in Palmetto Bay.

The public trust is enhanced when important meetings are held in full view of the public - and with participation.

BACKGROUND INFORMATION: Some information regarding the DUV code update. Please review my blog for some past posts that will provide background on the DUV code, including:

August 23, 2017, The Smart Growth Partnership - The Village of Palmetto Bay wins a smart growth award for its DUV Code.