Taking a close look. A ten foot multi-use path proposed for around Palmetto Bay by a member of the Village Council - here is how it might look. Actual photos of a similar, if not identical design. Offering some Pros & Cons

Discussion is ongoing between the Village Council members regarding a 10 foot wide multi-use path around Palmetto Bay.  Many residents are unaware of how serious this proposal is as this proposal was last discussed at a "Visioning" session held on a Saturday morning (January 12) where only 3 members of the public were present.  The meeting was not broadcast on WBAY or live streamed.

The issue of public participation and notice of meetings is another discussion for another time.

This present blog post is about wide sidewalks and what they will look like here in Palmetto Bay. I have posted aerial and street level photos below showing a 10 foot multi use path in a residential area. The area is SW 87th Avenue and Miller Road area.

Is this what councilwoman Marsha Matson is proposing for Palmetto Bay?

Please note this post is informational in order to discuss, not attack, the proposal. There are pros and cons to this proposal, as in most any ideas.  I discuss some of the issues below. 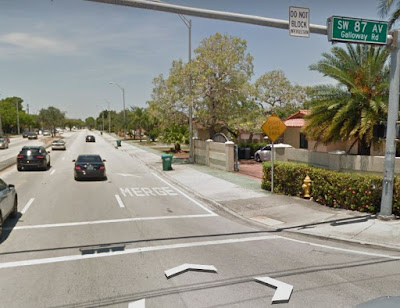 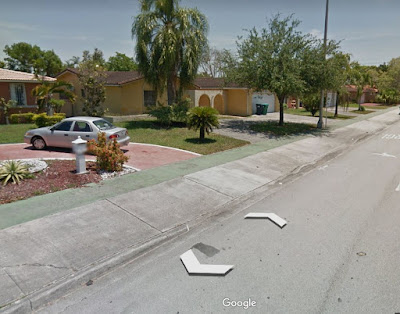 How would  such a path look, running alongside either SW 184th or SW 136th Streets? Along US1, would vehicles pulling out of stores and shopping centers stop before entering these paths or will they continue through to the edge of the road where they would block the path or worse, could plow into any bicyclists riding on the path?

Would your opinion change about such a path when advised that bicyclists would not be legally required to use such a path instead of the roadway?

Note:  This is just one way such a path could be completed. Perhaps softer walkways, such as used in paths at the park are prepare, though paths such as the one proposed for surrounding Palmetto Bay would certainly be subjected to much heavier, constant use including trucks and cars that would be driving over it to enter or exit properties.

Cons: Bicyclists competing with pedestrians, moving in same direction as the pedestrians or other users identified above.

Cons for property owners:  That's a lot of cement in front of homes and/or businesses. Much more green space/drainage swale is taken up than simple bike lanes.

Additional cons specific to cycling: Bicyclists are vehicle drivers, they belong on the road… and they are safer on the road. This type of path discourages use by cyclists as, unlike the street or bike lanes, the route is constantly undulating due to the driveway curb cuts.

In Florida the bicycle is legally defined as a vehicle and the bicyclist is a driver. Bicyclists have the same rights to the roadways, and must obey the same traffic laws as the drivers of other vehicles. These laws include stopping for stop signs and red lights, riding with the flow of traffic, using lights at night, yielding the right-of-way when entering a roadway and yielding to pedestrians in crosswalks.