Who lost in the Village Manager fiasco of Monday, October 7, 2019? Perhaps everyone who wanted improvement to our village as confidence is shattered. This should be cause for concern as when a "partner" pulls out like this, it indicates an unhealthy, unstable government, expect a poor product in the foreseeable future.

I certainly did not see this coming. It is shocking to see a group like I3 use the language seen in an e-mail (posted below) to the Palmetto Bay Village Council. But as one saying goes, 'play silly games, "win" silly prizes'. The question is who terminated who and what will this mean for our downtown area? 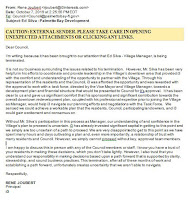 Perhaps it is time for this current Mayor and Village Council to simply close up shop and scrap any planning. The word is out and it will be very difficult to bring new quality groups in to work with the present leadership. Work to repair the damage to reputation will take much more than a few staged events with live feeds and selfies.  What occurred Monday, October 7th, 2019, was a figurative torching of the reputation of Palmetto Bay. So many worked so hard for a positive image. Petty politics and scapegoating hit the fan.

It is important to contrast the behavior and actions exhibited at the Special Council Meeting of Monday, 10/7/2019 with the June 11, 2019 article that appeared in Miami Today, by Jesse Schecker, entitled "Karyn Cunningham Palmetto Bay mayor seeks creation of vibrant downtown".  The controlled village press fails to match the gutter performance. 'Resident-centric' change was promised, but to date, only chaos,  and unreasonable delay has been delivered. One has to wonder if this I3 project was to be a cornerstone in what the current Mayor had planned for the Palmetto Bay; what she termed (but did not fully disclose) “…creating a vibrant downtown that attracts new residents, businesses and visitors.” (emphasis added)

But now one has to wonder what will ever be created as never, never, have I seen a communication such as this from an alleged Public/Private partner:

I’m writing because it has been brought to our attention that Ed Silva - Village Manager, is being terminated.

It is not our business surrounding the issues related to his termination. However, Mr. Silva has been very helpful in his efforts to coordinate and provide leadership in the Village’s downtown area that provided i3 with the comfort and understanding of the opportunity to partner with the Village. Through his representation of the residents and the Council, i3 was afforded the opportunity and was rewarded with the approval to work with a task force, directed by the Vice Mayor and Village Manager, towards a development plan and financial structure that would be presented to Council for it’s approval. It has been clear to us and gave us significant comfort that his sponsorship and significant contribution towards the overall downtown redevelopment plan, coupled with his professional expertise prior to joining the Village as Manager, would help i3 navigate our planning efforts and negotiations with the Task Force. We sensed we could achieve a workable plan that the residents, Council, participating landowners, and i3 could gain excitement and consensus on.

Without Mr. Silva’s participation in this process as Manager, our understanding of and confidence in the Village’s plan to proceed is uncertain. i3 has already invested significant capital in getting to this point and we simply are too uncertain of a path to proceed. We are very disappointed to get to this point as we have spent many hours and days cultivating a plan and, even more importantly, a relationship of trust with many residents and Council. However, we simply cannot proceed without key, approved team members.

I am happy to discuss this in person with any of the Council members or staff. I know you have a trust of your residents in making these decisions, which you don’t take lightly. However, I also trust that you understand our responsibility in making decisions based upon a path forward that is supported by clarity, stewardship, and sound business practices. This termination, after all of these months of work and establishing a path forward, unfortunately creates uncertainty that we aren’t able to navigate.

This is cause for concern, regardless of your position on the project: I may not have been a fan of this unsolicited bid, but wow, a pullout after substantial investment - I am told a '6 figure' investment by this private partner in the process before the pullout. Perhaps the so-called task force was seen as a sham. Perhaps any commitments made in private by the members of the village council fail to match the performance in public.  What is next? We shall see.
CLICK HERE to view prior posts  relating to this Unsolicited bid project (I remain on the record and transparent).

More development! LOOK FOR A FUTURE ARTICLE relating to a grand new MEGA development that may be coming soon to a Palmetto Bay Village Council near you!
Posted by EugeneFlinn at 6:00 PM