CRAP! More swim advisories for 5 local beaches. This is ridiculous. And to think the County just passed a budget that does NOT invest significant money in repairing our Water Treatment infrastructure.

It just ceases to be funny.  When will we get County leadership to step forward and fight for clean water. Beaches are Miami-Dade County's tourism engine. Act like it. We need ACTION, not officials who merely "sound alarms." We get plenty of alarms from our local news media - what triggered me for this latest blog post? See:

Miami Herald online: October 3, 2019: Swimming advisory in effect for 5 Miami-Dade beaches for too much fecal matter, by David J. Neal.

As reported by David Neal in the Miami Herald:


The Department of Health in Miami-Dade County on Wednesday posted swimming advisories for five Miami-Dade beaches for too much fecal matter.

The bacteria enterococci count in the waters at these beaches, according to the DOH, “may pose an increased risk of illness...” (Emphasis added) 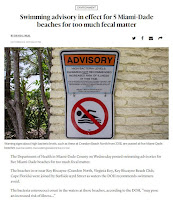 The big flush: Miami-Dade County officials want us to believe they are concerned about sea level rise. Perhaps their concern is that a rising sea level in Miami-Dade is more like having our community toilet overflow, spewing its sickening contents into our community!

I'm sick of this _ _ _ _ (insert expletive)! Maybe we need to reverse the health warnings relating to swim advisories. Just tell us when we CAN safely swim and enjoy our beaches.

This is Miami-Dade's "New Normal": The new requirement that we check both the weather and the pollution advisories before we decide to go to the beach: Child: "Mommy, can we go to the beach today?" Parent: "Let's me check first to see if the toxin levels are acceptable." Note the use of the term "acceptable" rather than clean - yuck!

RELATED PRIOR POST:  August 22, 2019, Not again! Our beaches have again failed to meet Health quality standards. Clean this up and promote clean water during Super Bowl Week.

Swim at your own risk, and only if you have the stomach for it. Apparently we are asking people to swim in our toilet. Yuck!

Is anyone else sick of this (CRAP)?