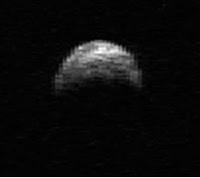 Near-Earth asteroid 2005 YU55 is carbon-colored and dark, the asteroid measures some 1,300 feet wide. An object this size could really ruin our day if it ever hits the earth.


Experts assure us that an asteroid similar in size to 2005 YU55 won’t make its rounds until at least 2028., based on where it's likely to cross Earth's path on its elongated, 446-day orbit around the sun.

Click on the link - NASA’s Near Earth Object Program to view animated images of the Trajectory of Asteroid 2005 YU55 - November 8-9, 2011

(From the SCAS website – CLICK HERE to view the full site) Weather permitting, meet the friendly SOUTHERN CROSS ASTROS, 8-10 pm every Saturday evening all year at the FREE popular, outdoor SCAS Observatory in Miami-Dade's Bill Sadowski Park & Nature Center, SW 176th Street / SW 79th Ave., 1/2 mile west of Old Cutler Road. Under the darkest skies nearest to downtown, you might see a satellite a sudden brilliant meteor or the Int'l Space Station in addition to the seasonal planets, the magical Moon and dazzling constellations. Enjoy the beauty overhead in SCAS state-of-the-art hi-tech equipment, including the largest telescope in Miami-Dade County for public use.
Posted by EugeneFlinn at 11:21 AM