I have been fielding questions on whether my recent litigation updates relating to Palmetto Bay Court cases represent all of the litigation Palmetto Bay is significantly involved in. The answer is no, there are many other cases. Some are foreclosure or other similar actions where Palmetto Bay is a named party, but does not significantly participate in the litigation. There is at least one personal injury case filed against the Village, which is being defended through Defense counsel provided by the Village insurance carrier.  But the answer is yes, there are other significant Palmetto Bay cases being litigated that may be unknown to you.  I will update on several in some upcoming posts (but not consecutive posts as there are other topics to cover). 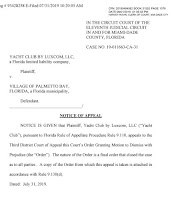 Palmetto Bay is currently embroiled in an Appeal pending before the Third District Court of Appeal. This appeal is of a dismissal of Circuit Court Case No.: 2019-011663-CA-31 (Order rendered 7/01/2019) that dismissed the complaint filed by LUXCOM.

The basis of the dismissal was stated in the final order of dismissal in that the Plaintiff, LUXCOM, has other remedies, that LUXCOM is "...fully able to raise and assert all of the claims asserted in this Complaint, after final agency action, through a Petition for Writ of Certiorari on a zoning map amendment, or through a Petition to the Division of Administrative Hearings on a comprehensive plan amendment."

LUXCOM filed its Petition with DOAH on August 28, 2019, DOAH Case No.: 19-004612GM. See PRIOR RELATED BLOG POST of Thursday, August 29, 2019, Petition filed against the Village of Palmetto Bay by Yacht Club By Luxcom – seeking an administrative review of the rezoning of the properly commonly referred to as the “FPL Cutler Plant” property. Link to 616 page petition provided. The Petition to the Division of Administrative Hearings has been discussed throughout this blog and PRIOR RELATED BLOG POSTS can be located through clicking the “DOAH” label (12 prior posts on this subject).

There is an online docket for the Third District Court of Appeal, as well as the Miami-Dade Circuit Court and DOAH - (just not one for Palmetto Bay). The Third District case number is 3D19-1495, styled as YACHT CLUB BY LUXCOM, LLC vs. VILLAGE OF PALMETTO BAY, FLORIDA.

There is not much to report on at the present time that relates to this appeal. The appeal was filed and paid. The record has been prepared and the parties agreed to an extension of time for the Appellant, LUXCOM, to file its initial brief – the date for filing appears to be December 8, 2019.

I would expect the next report on this litigation (APPEAL) will be December 9, 2019.

READING IT HERE - BECAUSE PALMETTO BAY REFUSES TO UPDATE THE "LITIGATION PAGE"-  SPECIAL NOTE: Palmetto Bay officials continue to neglect to update the “litigation page” online to include any information relating to this action (or other recent actions) on the official village website. Posting would be for courtesy, as it is not required, but would aid in transparency. As pointed out previously, many of the documents from the prior administrations have been removed from public access online, casting shade on transparency as well as accessibility of these public records.

After all, if DOAH can post these (and many other) documents online, why can’t Palmetto Bay? Don't buy the "ADA" argument. DOAH/the Courts are under the same ADA requirements as any other government entity. There is no lack of ability for Palmetto Bay elected leaders, only a lack of will to make the records accessible.

Eugene Flinn
Posted by EugeneFlinn at 9:00 AM