Nearing the finish line? Years of advocating for an end to distracted driving in Florida, an update Guest Post - Mark Merwitzer - an advocate for safe road travel

EDITOR's NOTE: I am pleased to present another guest post to the South Dade Updates Blog (SDU) from Mark Merwitzer.  CLICK HERE for prior relevant posts relating to Mark Merwitzer.  Mark has been hard at work appearing over the many years before the Florida Legislature to enact life safety legislation relating to distracted driving.

I want to thank Mark Merwitzer, a Palmetto Bay resident and a founding member of our Palmetto Bay Youth Community Involvement Board (and a past Chair of the Youth Board) for his tenacious efforts on this anti-distracted driving initiative.

I am beyond excited to announce the passage of House Bill 107 through the Florida Legislature, and now is on its way to Governor DeSantis’s desk. Years of my hard work, along with others, has finally paid off.

After three years of my appearances in multiple committees, working with multiple elected officials, rallying support at a local level, and developing a relationship with many Florida politicians, as well as many families who have lost loved ones and then getting them involved, today is the day the Florida Legislature finally passed a texting while driving ban with primary enforcement.

Out of 50 states, 47 have laws to ban texting while driving as a primary offense. Florida is not one of those yet, but Governor DeSantis will have the bill on his desk within the next few days to make texting while driving a primary offense. In addition, the bill would prohibit handheld cell phone use in school and work zones. Currently Florida has a secondary offense which prohibits police officers from giving tickets to texting drivers unless another infraction is involved. Consequently, the roads are filled with people distracted by their phones often resulting in accidents and fatalities. Safety is the foremost concern for all, yet, Florida is currently lacking with this commonsense legislation. That will change October 1st, when the new law takes effect.

My personal journey began three years ago when I was just 16 years old. I was driving down the MacArthur Causeway with my dad after having lunch with my grandmother. My dad was cursing at every car that went by for swerving in and out of their lanes. I noticed that the vast majority of these drivers were on their phone, totally oblivious to the road. It occurred to me that no one was doing anything to address this massive road safety issue. When I got home and did some research, not only did I find that Florida did not have a primary enforcement law, but texting while driving impacts my generation the most. 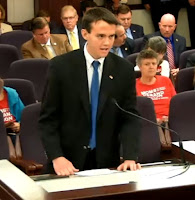 So, I got to work. I reached out to my local officials along with the local youth councils -one of which I was the chair of- and asked them to do something about this severe problem. Unfortunately, the issue is preempted to the state which means that local governments cannot regulate texting while driving within their own municipalities. So instead of enacting local laws, I am pleased to have worked with many people such as Commissioner Daniella Levine Cava, Mayor Eugene Flinn, Mayor Cindy Lerner, and many others to have them all pass urgings (also known as legislative requests) to the Florida Legislature and then lobby for the issue.

After all of these urgings passed, I contacted Senator Rene Garcia with the help of outgoing Senator de la Portilla and asked him to sponsor a texting while driving ban in the Senate. Senator Rene Garcia agreed. Representative Slosberg sponsored the bill in the House. Even though the bill did not pass the first year, it was the very first time any kind of texting while driving bill received a hearing since the secondary ban passed in 2013. It was also that year when I traveled up to Tallahassee for the first time and presented the bill before a Senate Committee. It was nerve racking for a then 16-year-old me. I am extremely grateful to everyone who supported me in that first year. 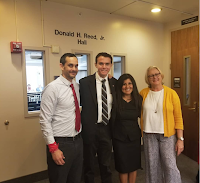 The next year is when things really got moving. After going up to Tallahassee multiple times in 2018, the bill managed to get through the Florida House and 3/4 of the Senate committees. Unfortunately, the last committee chair, Rob Bradley, refused to hear the bill. Senator Bradley single-handedly killed the bill last year. That action devastated many families who lost loved ones and went to Tallahassee to advocate for the bill.

However, I was not discouraged at all and decided to keep up the good fight.

But, as the saying goes, the third time's a charm. This year, I am grateful for the sponsorship of Senate President Designee Wilton Simpson and the work of Representative Jackie Toledo. With their sponsorships and the backing of a coalition of which I am a part of, getting grieving parents on board, sacrificing my spring break, talking to dozens of legislators, and appearing at almost every hearing for the bill, we were finally able to get it done this year. I am so glad to see my hard work finally pay off.

Thank you to everyone involved for making our roads safer. 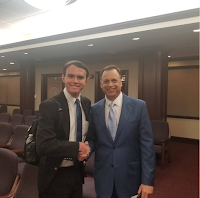 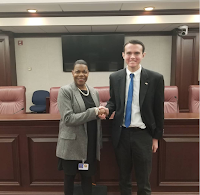 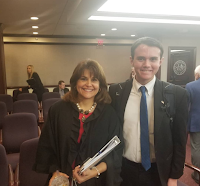 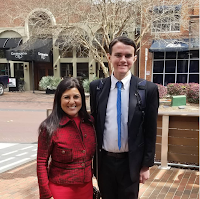